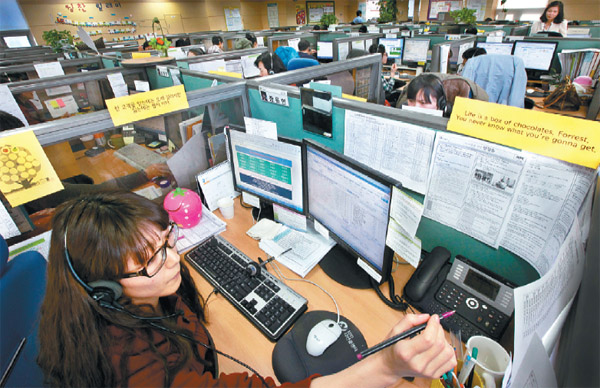 A worker at the 120 Dasan Call Center, the Seoul Metropolitan Government’s 24-hour call service, answers a call at their headquarters in Dongdaemun District, central Seoul on April 12. The yellow placard on her left states, “It takes a long time to gain one customer, but an instant to lose one.” By Park Sang-moon


This is part 1 of a 2-part series about a call center in Seoul. Part 2 will explore the foreign language department of the service tomorrow.

“I’m in the Gimpo Airport area. Where is the nearest hospital that specializes in internal medicine? Preferably a big one.”

The female voice on the other end of the inbound call is slightly panicked. Cho Mi-hee, a 38-year-old telephone consultant at the Seoul Metropolitan Government’s 24-hour, free call service center, quickly types the location into their computer database.

“I am currently confirming hospitals that are open.”

She scrolls down a long list of hospitals, checking their operation hours.

“It’s sort of urgent,” the woman mumbles on the line.

“Because it’s evening, many hospitals are closed. Is it all right if I text message you the list of hospitals right after the search completes?” Completing the search, Cho texts a list of three open hospitals to the previous caller’s cell phone before another call hits.

She speaks into the microphone piece of her headset, voice steady despite the haste. “Hello, this is the 120 Dasan Call Center. How may I help you?”

If you’re in Seoul, you can dial 120 and reach the one-stop call service which operates 24/7, all year round.

The 120 Dasan Call Center was officially launched by Seoul in September 2007 in order to provide a free and convenient telephone service where citizens can ask a team of ready phone operators sitting at computers any questions regarding daily life issues or district office affairs.

The Dasan Call Center is located in a new, silvery-white building next to the Seoul Folk Flea Market in Dongdaemun District, central Seoul.

During the daytime, sunlight floods through large, airy windows. One wall on the fourth floor is decorated with the headshots of the consultants. Most of these phone consultants are young and female. Some are as pretty as their melodic voices would lead you to imagine.

Dasan’s 500 consultants are spread over four floors. Rows of spacious cubicles extend across all directions on each floor. Each desk is equipped with two flat-screen monitors: One refers to their database, which organizes a plethora of general and obscure information, the other to search the Internet and connect calls. The call center hooked up an extra headset to a computer so that a Korea JoongAng Daily reporter could listen in on Thursday, April 5 at their peak time, 7 p.m.

“What time will the sun rise tomorrow?” asks a man in his 20s or 30s, slightly bashful.

“Please hold on one moment.” After a quick search on the Naver portal site, consultant Cho replies, “The sun will rise at 6:10 a.m. tomorrow. Even as she speaks, she types up the inquiry and answer into an online form to log the conversation into their system. The call ends.

“If a customer calls back at a later time, we can refer back to the context of the previous call,” she explains. Recordings of the conversations are kept by the center for a year.

Another inbound call is connected. Footsteps are heard. “There are a lot of crates in front of a grocery store blocking the street,” says an elderly woman.

“I’m sorry, it must be dangerous and inconvenient because the boxes are blocking the path,” replies Cho.

The woman, encouraged by the sympathetic response, is riled up now. “I’ve complained to the store owner before, but he didn’t do anything about it. This happens frequently.”

“Can you tell me the address?”

With the dexterity of an FBI agent, Cho pulls up a map of Seoul and accesses the street view to confirm the exact location and the width of the narrow sidewalk. Cho replies she will notify the Seongbuk District Office to dispatch a civil officer to examine the scene within 24 hours.

Dasan consolidated the call center services of the city’s 25 local district offices in November of 2009. But many callers are not aware of this fact.

“We still get angry citizens who demand to be connected to an official at the district office right away. They think we are standing between them and the civil official,” Cho states.

Three call service companies are contracted by Dasan to provide telecommunication services, hence the consultants, who are employed by these companies, are not civil servants.

Cho, an employee of one of these companies, has worked at the center for two years and specializes in district office affairs, but said “at this time during the day, the type of calls I get tend to blur together.”

Most of the inbound calls are not out of the ordinary, with callers asking simple questions such as directions, traffic inquiries or connecting to someone at a district office.

Consultants are evaluated by their companies based on their speed and efficiency, and each regular shift consultant can get over 100 calls per day; calls last on average two minutes and 10 seconds.

“I drink lots of water - it helps me keep stress down and detox,” Cho said.

After six years of refinement, the 120 Dasan customer satisfaction rate reached 95.7 percent, according to a recent survey by the Seoul Metropolitan Government - more than a twofold increase since its initial launch.

Other countries have expressed interest in the Dasan Call Center model as it is the only such 24/7 free call service run by the government in the world. They also offer service in five languages in a separate department.

“We recently had officials from Chile, Singapore and Malaysia visit the Dasan Call Center to use it as a benchmark,” said Jung Won-jun, customer service official of the Seoul Metropolitan Government.

Over the years, officials from 23 countries, not to mention many U.S. university faculty and local government officials, have visited the facility - named “Dasan” after the pen name of the late Joseon Dynasty philosopher Jeong Yak-yong (1762-1836) - to see how it works.

But where are the prank callers, abusers, misanthropes and drunken profanities?

Over an hour and a half, all the calls to consultant Cho are legitimate questions from polite, thankful citizens.

“Sometimes elderly men like to call in the middle of a drinking game,” said 29-year-old Yang Jung-a, who specializes in general civil calls.

The men purposely call to ask how to write out the strokes of a difficult Chinese character or the definition of a difficult word and demand that she explain it to them really quickly, says Yang. “I would be able to hear laughter in the background and know that it’s their way of sort of testing me and having fun.”

“Once in a while we get callers who swear. But I learned the best thing to do is not respond. If you fight back, they get more provoked, but if you just listen, they eventually run out of steam and hang up on their own accord.”

Yang has also saved two lives recently. When one pregnant woman began contractions on the road she guided her to a nearby hospital. She copes with stress by talking it out with her colleagues.

“Most malicious calls are transferred to a separate division downstairs that handles the more vicious civil complaints, or a team manager steps in,” said Yang.

Their team of six is comprised of more experienced consultants. Less than 15 percent of all the consultants are male.

“Of course there are people who make inappropriate remarks, swear at us and ramble on. Some make sexual remarks and death threats,” admits one male consultant who handles the wilder civil complaints.

“That’s why we need men in this division,” he whispers.