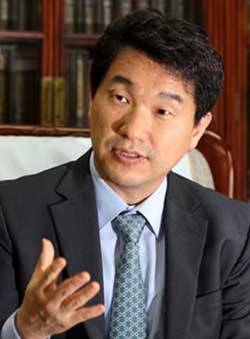 Lee Ju-ho, the minister of education, science and technology, admitted yesterday that it was wrong for the ministry to have disclosed certain figures on school violence when it announced the results of a nationwide survey last week. Instead of simply providing raw data, the ministry calculated percentages for the number of students bullied and the number of gang members at each school that it later admitted were misleading.

“The purpose of the ministry’s survey was ultimately to resolve problems arousing from school violence by sharing information with the public on each of the school’s bullying conditions,” Lee told the JoongAng Ilbo in an exclusive phone interview on Saturday. “[The purpose] wasn’t to calculate general statistics.”

The minister’s comments come as local media used the provided percentages to rank schools by number of bullying cases and gang members. The reports immediately drew criticism from teachers and parents who claimed some schools were indiscriminately branded as violent.

The ministry said results from the survey were statistically insignificant because only 25 percent of surveys were returned. In total, the ministry sent surveys to 5.59 million elementary, middle and high school students nationwide at 11,363 schools to ask them if they had personally experienced or observed bullying inside classrooms and if they knew gang members attending their schools.

In response to the criticisms, the ministry removed the percentages from its Web site less than a day after it published the results.

Local media were also criticized for misrepresentation of the raw data with its ranking. For example, a school where only one student responded to the survey and said he or she had experienced bullying was marked with a bullying rate of 100 percent.

Critics also noted that those schools that encouraged students to respond honestly may be unfairly portrayed by the ranking, as the number of bullying cases reported would naturally be higher at those schools.

At a high school in North Chungcheong, for example, 68 students said they had experienced bullying. That number was relatively higher than other schools because more than 80 percent of the school’s students answered the surveys.

The vice principal of the school said that “it wanted to ask for as much participation from the students to prevent even minor bullying from happening” but that the “percentage of bullied students was marked as higher than other schools with fewer respondents.”

At the same time, though, the ministry stood behind its decision to release raw data from the surveys.

“The purpose of conducting this survey was to let schools know that they should give careful attention to even one student being bullied at schools to root out school violence,” the minister said. “We could have given the results to respective schools only, but then they wouldn’t feel as responsible for the bullying as if we shared the results with the public.”

The ministry’s latest measures come after several cases of suicide caused by peer bullying in the country.

In January, President Lee Myung-bak vowed to root out school violence, raising the issue’s prominence. And in the following month, the Education Ministry promised to fight bullying by working with the police to collect information on bullies and to protect victims.