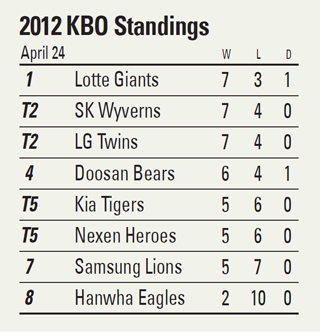 Heavy rain washed away the KBO’s weekend action except for the Samsung Lions and Hanwha Eagles, who faced off in Cheongju, North Chungcheong, on Sunday. The defending champion Lions beat the Eagles 8-4, rebounding from a sluggish start to the season.

But the Daegu-based Lions, seen by many to be destined to repeat their title run, will face a tough test this week when they meet the current No. 1 and No. 2 teams in the standings.

Starting tonight in Daegu, the Lions have a three-game series against the slugging Lotte Giants, who took the top position after beating the Kia Tigers 11-7 on Saturday.

This is the first time the Giants have reached the number one slot in the standings since April 19, 2008.

The Giants lost slugger Lee Dae-ho to Japan’s Orix Buffaloes and were thought to suffer offensively as a result, but the team is currently No. 1 in batting average (0.307), on-base percentage (0.362) and slugging percentage (0.413).

After meeting the Giants, the Lions move on to Incheon to face the SK Wyverns for a rematch of last year’s Korea Series.

This time, the Lions’ offense will be tested by the Wyverns’ strong rotation. The Incheon-based team has the lowest team ERA (2.63) and opponent batting average (.203).

The Wyverns collected only one victory last week, so the team will be eager to snatch back the top position from the Giants.

The LG Twins, who share second place with the Wyverns, are on a three-game winning streak and will look to extend it against the Nexen Heroes during this week before meeting the Giants starting from Friday.

The Twins’ cleanup hitter Jung Sung-hoon has been on fire as of late and currently leads the league in home runs with four along with the Heroes’ Kang Jung-ho.

Jung became the first to hit a home run off of former Major League Baseball pitcher Park Chan-ho when he hit a two-run shot last Wednesday against the Eagles. Park lost his first game of the season and KBO career.