The St. Cuthbert gospel, Europe’s oldest intact book, will remain in Britain after a record-breaking fund-raising campaign by the British Library, it said yesterday. 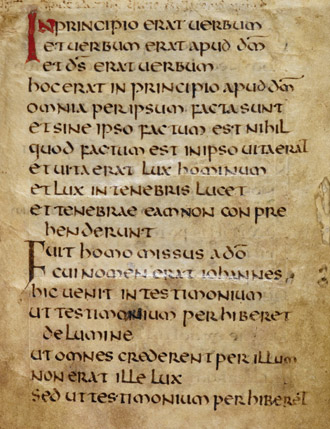 This photo, released by the British Library last Tuesday, shows a page in the St. Cuthbert Gospel. [AP/Yonhap]

Of the 9 million pounds ($14.2 million) required to purchase the seventh-century copy of the Gospel of St. John, half came from the National Heritage Memorial Fund with charitable foundations, trusts and the public making up the rest.

It is the largest-ever campaign mounted by the library and ensures the manuscript, which was buried with the Christian martyr on Lindisfarne, off northeast England, in about A.D. 698, stays in the U.K.

“To look at this small and intensely beautiful treasure from the Anglo-Saxon period is to see it exactly as those who created it in the seventh century would have seen it,” said Lynne Brindley, the library’s chief executive.

“The exquisite binding, the pages, even the sewing structure survive intact, offering us a direct connection with our forebears 1300 years ago.

“This was a once-in-a-lifetime opportunity to secure the gospel for the nation and we were both grateful and touched that so many people felt moved to support our campaign,” she added.

The book was rediscovered in the Durham Cathedral in 1104 when a Viking raid forced the coffin to be moved.

The gospel, which has been on loan to the library since 1979, was sold by the clerical Society of Jesus, British Province, to raise money for education and restoration work.

It will now be displayed equally at the library and in the northeast of England.