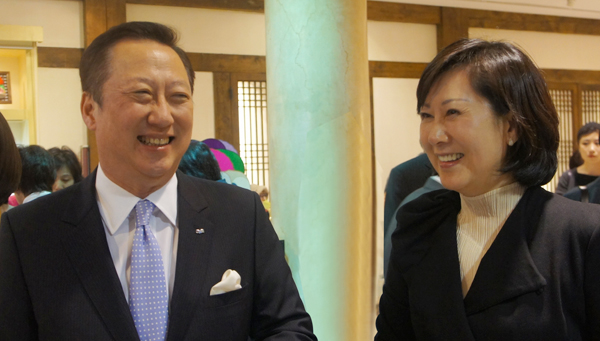 Park Yong-maan, left, chairman of Doosan Group, is greeted by Choi Jung-im, right, general director of Chongdong Theater, as he enters the theater to watch “Miso” on Wednesday.


Hundreds of thousands of foreign tourists have already enjoyed the traditional Korean musical “Miso.” But it is less popular among domestic audiences, a fact that Choi Jung-im, the general director of Chongdong Theater in central Seoul, has set out to change by attracting new partners for the show.

In the past, local conglomerates have actively supported Western performing arts, including classical music shows, operas and ballets, but haven’t paid so much attention to Korea’s traditional pieces.

This year, though, a supporter of the traditional arts became head of the board at the Myeongdong Chongdong Theaters Foundation, which provides support to theatrical productions. The new chair, Park Yong-maan, who is also chairman of Doosan Group, has promised support for “Miso.”

Heads of businesses like Samyang Corporation and Noroo Holdings also recently became board members of the foundation.

“I think the lack of support we receive stems from our schooling. It doesn’t spend much time on traditional dance or music,” Choi said. “However, with our new partners, along with current partners Hana and Kookmin banks, I believe we’ll be able to let more Koreans know that our traditional arts are not only valuable but even exciting.”

A press conference to announce the foundation’s offer of support was scheduled on opening day for a new rendition of “Miso” that Choi revised so that it would appeal more directly to domestic audiences.

“Although the new version still adopts the folktale Chunhyangjeon as the main plot, we have decided to make revisions so that all traditional cultural activities, including dances, music and games, blend well into the plot rather than being a distraction,” Choi said.

She also welcomed Park and his company to the first screening of the show.

“I believe his appointment reflects his affection for traditional culture,” she noted. “We have high hopes for Chairman Park’s contributions, as he promised to become an active supporter of our theater group.”

Choi, who was inaugurated as the general director of Chongdong Theater in 2009, said her theater organization faces limitations that prevent “Miso” from growing in popularity, including limited financial support from the government. The small size of the theater is also a hindrance, she said. It currently seats only 280 people.