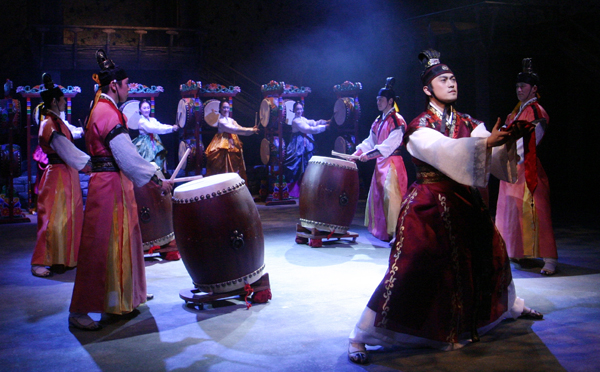 On Wednesday, Chongdong Theater launched a new version of “Miso,” a traditional, nonverbal musical that blends different kinds of traditional dances, music, games and a wedding ritual into the folktale Chunhyangjeon. Provided by the theater


When some Koreans think about traditional performances, they can’t help but yawn, seeing them only occasionally out of patriotic obligation.

But don’t try that line of thinking with Choi Jung-im, general director of Chongdong Theater in central Seoul. She once blamed Koreans for neglecting their own culture, pointing out that about 85 percent of visitors to her theater company’s traditional musical, “Miso,” are tourists from overseas.

This lopsided attendance persists even as “Miso” has been transformed to appeal to viewers from all cultures and generations, Choi argued. 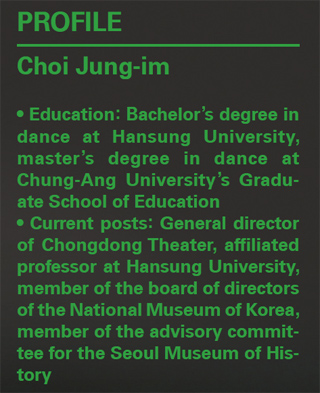 Since being inaugurated as the director of Chongdong Theater in 2009, Choi, 57, has made numerous efforts to attract both domestic and foreign audiences to her theater company in order to “rescue Korean traditional performances.”

Drawing on her past as a chief dancer at the National Dance Company of Korea, Choi has focused on “Miso,” tweaking it in ways that she hopes will make it more appealing while also maintaining its historic roots. “Miso,” which is Korean for “smile,” has customarily been a nonverbal Korean musical that features traditional dance, music and plays.

But in 2010, Choi decided to shake things up at her theater company, adding a story line - the famous “Chunhyangjeon,” also known as the Korean version of “Romeo and Juliet” - to the performance for the first time. Before adopting the tale of Chunhyang in 2010, the show was simply a series of one traditional performance after another.

Though Choi’s idea was a big hit with foreign audiences, Korean viewers were less impressed, a huge disappointment for the director. They soon tired of the abrupt appearance of traditional performances, such as samulnori (Korean percussion) or pansori (narrative singing), in the midst of the story.

After months of deep consideration, Choi agreed that the extra performances might be cluttering up the Chunhyang story. So, she tweaked it again, this time using as inspiration the traditional Dano festival, in which people celebrate and pray for a good harvest.

Now, “Miso” begins with a mix of traditional games and percussion music together at the beginning, all part of a Dano celebration that smoothly introduces the love story of Chunhyang and Mongryong that makes up the rest of the performance. From the moment the two star-crossed lovers meet for the first time at the festival until the final notes of the musical, the focus remains on them, with traditional performances, like pansori, only introduced to advance their tale.

The Korea JoongAng Daily sat down with Choi on Thursday, one day after the curtain rose for the first time on the revised performance.

Q. Why did you feel compelled to make this transformation?

Why has “Miso” attracted many foreigners but relatively fewer Koreans, so far?

At first, as Koreans were not so interested in watching “Miso” compared to foreigners, I only marketed to tourists. I wanted to include as much traditional culture in the musical as possible, something that I think appeals to foreigners. Japanese love colorful traditional dresses and dance, Chinese love pansori, and samulnori is enjoyed by all. In addition, my staff and I focused our promotions on foreign tourists. We offered them discounts and created a video clip to show before the show that briefly discussed Chunhyangjeon in different languages, including Japanese, Cantonese and Mandarin. 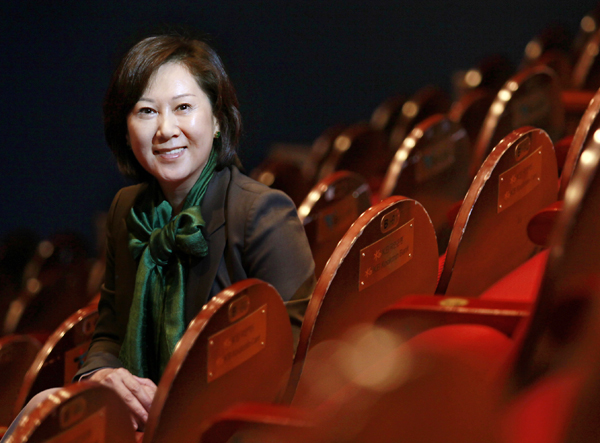 It seems you have tried hard to attract foreigners. Is there a strategy to draw young Koreans, too?

Not only “Miso,” but most traditional performing art groups believed they were marketing sufficiently to domestic audiences. But still, we were criticized for not doing enough. Only when I began working as the director for Chongdong Theater did the real problem hit me. I realized that, to reach out to Koreans, we needed a year-round marketing strategy instead of a seasonal one.

For a long time, traditional performance troupes would hold promotions before a new show to generate publicity. But this strategy only attracted those already interested in traditional works. After realizing this, I began to think about how to market to young Koreans so that they might enjoy traditional performances not merely out of patriotism but pure joy.

Then, I went on a tour around the world with a K-pop star to promote traditional Korean performances abroad. Of course, the program was quite successful in attracting foreigners.

But surprisingly, young Koreans came too. And though they originally intended to come for the K-pop act, I noticed they were absorbed in “Miso.” Some even apologized for holding prejudices against traditional performances that they never imagined would be so exciting and fun.

So currently, I am collaborating with young power bloggers to write reviews of “Miso.” First, they see the show, and then they post about it online. Every one of them has become a fan thus far. Many have apologized for neglecting their own traditional culture, thinking that it would be dull without even giving it a chance.

What are your ultimate goals or aspirations as a director?

My ultimate goal is to stage “Miso” in Las Vegas. I went around the world to watch and research many performances, and I was shocked when I went to Las Vegas. I always thought that the city was for gambling, but it isn’t anymore. It is a city of spectacular shows, and people visit not just to gamble but also to watch cultural performances.
It really struck me that many of the shows had elements derived from Chinese culture. Shows that were only possible in my imagination were being realized right before my eyes.

But even though the shows there are huge and spectacular, I still believe true excellence exists in Korean culture. Our culture has great artistic value. Just a single scene from “Miso,” say, could create an excellent performance. It’s just that Korean traditional performances haven’t yet been packaged into a popular product for the masses.

But I see possibilities. The government must invest in traditional arts so that we can export them. Currently, Hallyu is at its peak, and ultimately, it should focus on traditional culture, not only performing arts, but everything, including food and medicine. I am currently talking with officials in Las Vegas, but my work might take years.