In the Water They Can’t See You Cry: A Memoir 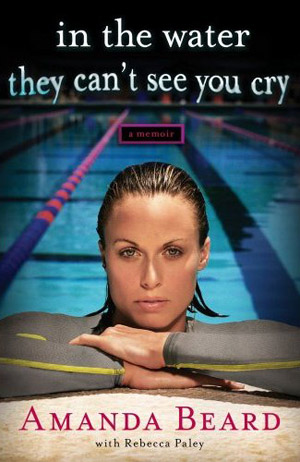 When Amanda Beard climbed the podium at the 1996 Atlanta Olympics, clutching her teddy bear as she collected her first gold medal, no one could see the torment that was starting to brew inside of her.

Whenever she smiled, cameras clicked and crowds roared with approval. She was just 14 at the time and apparently living the ultimate American dream.

Or so it seemed. The medals, the cheesy grin, even the bear, were all just a mask covering the demons she was battling.

Privately, her life was starting to unravel. Her parents had gone through a divorce with which she did not know how to grapple.

Beard celebrated her Atlanta success by drinking alcohol for the first time. In the years that followed, she began abusing harder drugs, including ecstasy, cocaine and LSD.

She got involved in bad relationships with other famous athletes that turned sour, and became so concerned about her looks - even though she was an in-demand model who once posed for Playboy - she battled bulimia.

Beard continued to be successful in the pool, breaking world records and adding to her stockpile of medals, but her private life was getting worse.

Unable to cope, she started cutting herself and was eventually diagnosed with clinical depression, which ultimately helped turn things around.

Now 30, happily married with a young son, and her troubles behind her, Beard decided to open up her battles by releasing a book “In the Water They Can’t See You Cry: A Memoir.”

In an interview with Reuters, Beard said she decided to reveal her darkest secrets in the hope that it might help someone else.

“My only hope with it is that it can give a voice to people that are dealing with the same things and issues,” she said.

“Already, I have had such a great response. People have reached out to me and told me how inspirational it was for them to read this that they’re dealing with the same things, that their daughter is dealing with them.

“For me, that makes the book a 100 percent worthwhile. No matter what anybody else says, [with] people that I’ve already touched, it is amazing.”

In the book, Beard gave a revealing insight into the pressures that elite Olympic athletes face and said it was not unusual for them to release tension through recreational drugs.

She admitted she went to a bar in Atlanta in 1996 and then tried ecstasy after the Sydney 2000 Olympics. Later, she confessed to experimenting with several drugs during a visit to South Africa.

“I think, especially [with] something like the Olympics, it’s every four years and it comes down to those moments,” she said.

“It’s so short, and we’re cooped up, stressed, and we’re under all this pressure to perform and have all this success and all this greatness.

“When it’s over it is like, ‘Oh my gosh, let me let my hair down, I just need to get out. I don’t want to think about anything. I just want to enjoy myself and have fun.’

“So many of the athletes are just cooped up for so long that we need to experience life, go out and have a social life as well. You can only seclude yourself for so long.”

Beard said she knew people would change their perception of her after reading the book but was no longer concerned about criticism because her perspective had changed since getting married and starting a family.

“Right now, I don’t battle depression, I’m not taking any sort of medication. I feel very confident in the place I am in,” she said.

“I have a great husband, an awesome son. But the reality is that life is full of struggles and hardships, and we all deal with different tragedies within our life. But it’s how we deal with them [that matters].

“Instead of dealing with them in an unhealthy way, which is what I used to do, I have learned other ways to deal with them.”

Beard has not given up on swimming. She is still training as hard as ever and trying to make the U.S. team in breaststroke for this year’s London Olympics. If she gets selected after the U.S. trials in late June, she will join an elite band of athletes to compete at five Olympics.

“Being a mom and being a full-time athlete has some exhausting moments, of course. But I also feel blessed,” she said. Reuters