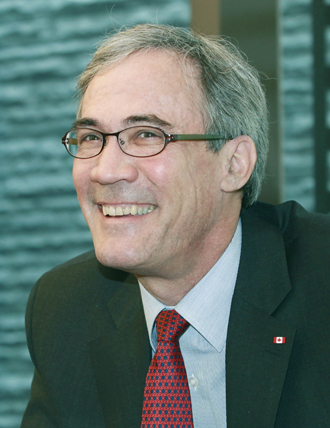 Having an immigrant from the Philippines elected as a parliamentary representative indicates that South Korea is acquiring a multicultural maturity, according to the top Canadian emissary here in Seoul.

David Chatterson, ambassador of Canada to South Korea, said that negative reactions to Jasmine Lee, a 35-year-old naturalized citizen and public servant who recently won a seat in the National Assembly, will fade away if South Korea continues to learn about cultural coexistence.

“Korea had not a lot of immigrants until recently, so you have a very homogenous culture and you are learning now. What I mean is to have different views, different perspectives, different people, different values, and that’s what the world is,” Chatterson said in an interview with the Korea JoongAng Daily and the JoongAng Ilbo at the Canadian Embassy in Jeong-dong, central Seoul, last Tuesday.

“We’ve been through that for 150 years just because of the nature of our country,” he said, referring to his country, Canada, which he said is largely composed of immigrants. He said color and ethnic lines have largely disappeared in Canada, but that this was not so when he was a child. “We worked out several challenges,” he said.

To move on the same path, Korea must deal with one issue in particular, he said: the growing influx of immigrants from the North.

He said North Korean defectors are making an increasing and positive impact on the South’s society, citing Cho Myung-chul, another representative-elect from ruling Saenuri Party, as an example. The South needs to help defectors acclimate to their new home, the ambassador said.

To help embrace North Koreans in the South, the Canadian Embassy in Seoul launched an English teaching project for North Korean defectors in February with the help of Canadians living in South Korea and the Citizens’ Alliance for North Korean Human Rights, a civic group based in Seoul.

“We have about 5,000 Canadians here in Korea teaching English .?.?. and the idea was to have university-level English language teaching and cultural exchange,” the ambassador said. Currently, 13 North Korean defectors are learning English twice a week from Canadian teachers at the embassy.

“In the first phase of the program, we are trying out seeing how it works and we will make adjustment and modification as we go on,” said Chatterson, who also serves as Canada’s ambassador to North Korea.

Chatterson, who took office in Korea last September, said he likes exploring the many aspects of the country by participating in the local arts scene or capturing Korean life through his camera lens.

He said exploring the charms of Korea will be a main theme in the celebrations of the 50th anniversary of bilateral diplomatic relations that Chatterson will mark in Korea next year.

“[When] Canadians look to Asia, typically they see China, Japan and India, but Korea sometimes gets overshadowed by those big countries,” the ambassador said. “At times when Korea looks to North America, you’ve got this great U.S., sometimes you don’t really see Canada, so there is a profile issue there.

“So when you have the 50th anniversary, you have take advantage of that and raise the profile of the relationship in both directions.”

Economic and commercial ties are also important for the two countries, the ambassador said, mentioning his personal goal of finalizing free trade agreement negotiations between Korea and Canada this year.

He said a free trade agreement with Canada will make Korea’s economy stronger, as a free trade pact with the U.S. did for Canada two decades ago. He said many Canadians were concerned about the impact of the North American Free Trade Agreement with the U.S., which has an economy 10 times bigger than Canada’s, but that instead it was a good opportunity to improve combativeness of goods like wine.

“When we signed the free trade agreement, wine makers pulled out all the old vines and replanted good quality vines,” he said.

“And over the next 20 years, they developed good quality grapes and skills in making wine. Now the wine industry is probably 10 times larger than it was, and we export millions of millions of dollars of wine.”

For Korea-Canada trade, beef is expected to play a growing role. Korea will resume imports of Canadian beef as early as this month for the first time since the outbreak of mad cow disease in Canada in May 2003.

The ambassador said he is happy to see the change and assured that Canadian beef is safe.