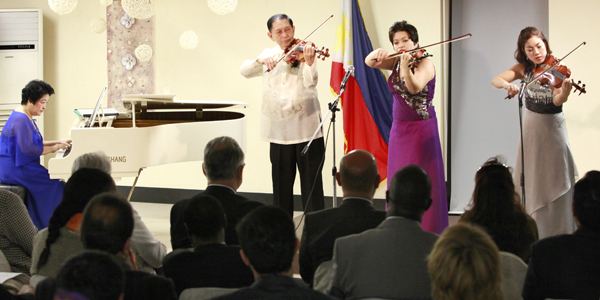 
A family of musicians that has traveled all over the world from Australia, Japan and the United States performed in Korea for the first time, warming the hearts of listeners.

They are not the von Trapp family, but the Filipino Kabayao Family Quartet. At a classical music concert held on April 17 at the Philippine Embassy in Yongsan District, central Seoul, the family of four and guest violinist Jimmy Tagala, Jr. filled the hall with violin concertos including ones by Mendelssohn and Ravel for diplomats and guests of the embassy, both Korean and Filipino.

The Kabayao Family was originally a quintet, but since the absence of their youngest son Gilberto, who joined the U.S. Air Force, it has become a quartet.

Instead, 21-year-old Tagala, student of Gilopez Kabayao since age 12, charmed the audience with the dexterity and emotion of a virtuoso as he played Johannes Brahm’s Violin Sonata No. 3 in D as well as his playful renditions of Filipino folk songs.

Gilopez Kabayao, 82, came into the international spotlight at the age of 20, earning praise from New York music critics after giving a recital at Carnegie Hall in New York, and went on to receive many awards and recognition as one of the rare Filipino classical musicians. His wife, Corazon, has accompanied him on the piano for the past 40 years.

It is no wonder that all three of their children are as musically talented.

Over dinner hosted by the Philippine Ambassador Luis T. Cruz after their first performance in Korea, the group joked and talked about Korean dramas and told stories from performances as a close-knit family who loved music but had numerous other interests.

Both Sicilienne, 34, and Farida Kabayao, 31, are recipients of awards from the National Music Competition for Young Artists in the Philippines. They also have other interests and have taught humanities and arts at universities.

“We usually have to practice after 10 p.m. while trying not to disrupt our neighbors,” said Farida, who currently teaches art appreciation to university students in the Philippines.

Kabayao met his wife, who is 20 years his junior, when she was a budding 19-year-old piano student. He was already an acclaimed violinist. But he saw her perform and told her immediately that he wanted her to become his accompanist. As a test, he gave her a stack of sheet music and told her to play the pieces on the spot. And she did.

“He did not know that my special talent is to be able to sight read any music on the spot,” said Corazon Kabayao. “There were already many other much more accomplished piano accompanists, and I was only a student, so I wondered why he chose me.”

“You can call it love at first note,” her husband said, the corners of his steel gray eyes crinkling. He is still agile and lithe and engaged in photography as a hobby. His favorite subject to photograph? His wife.

“I was inspired by the humility showed by the family, and their desire to spread their music to far-flung places,” said Ambassador Cruz. He opened up a coffee table book, authored by Corazon, to a two-page spread of Gilopez performing in a stadium in front of 35,000 students. “This is my favorite picture. I really respect that Mr. Kabayao does not choose who to perform for and is ready to perform anywhere in any condition.”

Indeed, Gilopez, admits he had a very memorable experience performing at a cockfight. “I tell my students, don’t expect Carnegie Hall. Our approach is to play without special effects and gimmicks and reach out with our music.”