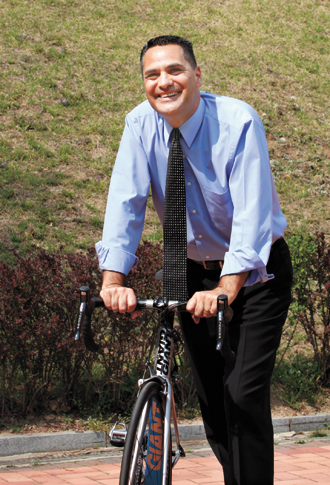 Patrick Rata, the newly appointed ambassador of New Zealand to Korea, is an avid sports fan. It’s been only two months since he’s arrived in Seoul, but Rata has already joined a local baseball team comprised of expatriates from different fields.

On Thursday, Rata will fire the starting gun for the fifth stage of the Tour de Korea, the country’s major international cycling race that kicked off its eight-day journey on Sunday in Incheon.

The fifth stage of the event is 147 kilometers (91 miles) from Geochang, South Gyeongsang, to Gumi, North Gyeongsang.

“Cycling is a national sport in New Zealand,” Rata said in a recent interview with the Korea JoongAng Daily. “I also personally enjoy cycling as a pastime leisure.”

The New Zealand Embassy has been heavily involved in this year’s Tour de Korea event as 2012 is the “Year of Friendship,” marking the 50th anniversary of diplomatic relationships between the two countries.

According to the New Zealand Embassy, both Korea and New Zealand have been promoting national bike paths, and the Tour de Korea is an opportunity to promote friendly relations between the two countries.

“I’m looking forward to the opportunity to focus on the wider aspects of the bilateral relationship, in this case, sporting contacts,” Rata said.

In part to celebrate the Year of Friendship, the New Zealand Embassy is also planning a series of political, cultural and academic events throughout the year. A New Zealand theater company will perform an award-winning play in Seoul and Busan titled “The Arrival” next month.

While the ambassador is relatively new to Korea, he said he has already had a hectic schedule on the peninsula.

“These first two months have been hectic,” Rata said.

“I have presented credentials to President Lee Myung-bak, embarked on a round of introductory calls with ministers, senior officials and embassy colleagues and I have had the great privilege to organize our prime minister’s visit.”

“Both President Lee and Prime Minister Key are committed to the FTA as they worked together in 2009,” Rata said. “FTAs are always challenging to conclude, so it’s important to keep our eye on the prize, which is strengthened economies and growth.”

He also said there is a need to ensure there is clarity around the negotiations.

“For example, agriculture is often seen as an area of sensitivity, but New Zealand is a very small player in the market, accounting for only a tiny percentage of Korea’s agricultural imports,” he said. “And more often than not, New Zealand is not competing with Korean farmers - we are competing with farmers from other countries who are also in this market.”

According to Rata, the two countries will come together very soon to hold their next round of negotiations, for which specific dates are still to be determined. Rata has had a separate career in the trade field, working for 10 years at the World Trade Organization as a senior official including as chief du cabinet in the director general’s office in 2002.

“It remains New Zealand’s great hope that we can progress and conclude these negotiations this year,” he said, noting that Korea is a significant regional and global player and is New Zealand’s fifth-largest trading partner. “The FTA will be beneficial for both countries - boost our respective economies, give our people better access to products at cheaper prices and create new opportunities for both countries’ exporters.”