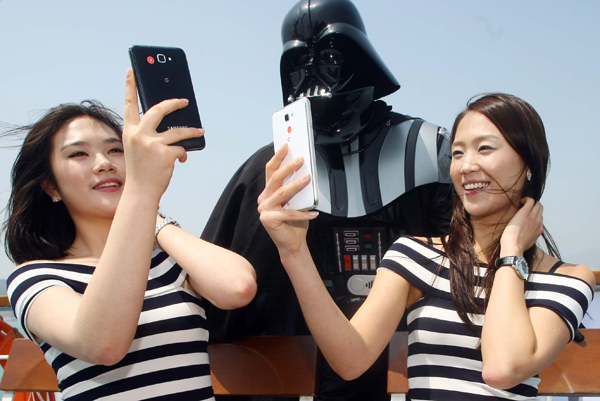 Models with LTE-enabled smartphones pose with Darth Vader, the symbol of KT’s LTE service, on a cruise near Haeundae, Busan, yesterday. The mobile carrier launched nationwide service for the fourth-generation network yesterday. [NEWSIS]

The company said the cellular service will be available in 84 cities around the country and on KTX bullet trains. It will reach rural areas by June. It started in Seoul in January.

KT, which is also the largest landline phone operator, is the last player to join the already heated LTE competition after LG U+ and SK Telecom launched nationwide services on March 29 and April 1 respectively.

Pyo Hyun-myung, president of the individual customer division at KT, said although KT was late in offering LTE service nationwide, what matters now isn’t coverage but how the telecommunication companies cope with exponentially growing demand for data on the LTE networks as was witnessed in 3G services before.

Customers complained of draggy Internet connections and dropped calls as the mobile firms’ 3G networks failed to cope with the surging demand data by customers with smartphones and other mobile devices.

“LTE’s data traffic per person will surpass that of 3G network systems by the end of 2013 and a data explosion in fourth-generation networks is inevitable, and big cities will be affected,” Pyo said in a press conference in Busan yesterday. “Koreans have a ppali ppali [rush rush] culture and they want speed. Our WARP technology will effectively manage traffic so that consumers won’t feel frustrated by the data explosion.”

Pyo said WARP technology gives the company greater flexibility to use networks in different regions that are seeing less traffic for optimum results, similar to how road authorities can open an extra lane to deal with congestion. Pyo said the data explosion will happen on 4G networks when the number of users surpasses three million.

KT claims its LTE network is almost twice as fast as its rivals’. In early April, it compared its technology with its rivals’ in 126 areas and 4,130 times, and the company’s WARP technology recorded a data transmission speed of 39 Mbps on average, 1.7 times faster than SK Telecom and LG U+.

The name of WARP was filched from the science-fiction film Star Wars, where it is used to refer to faster-than-light propulsion systems.

Pyo said commercialization of a voiceover LTE (VoLTE) service, which will enable smartphone users to access better voice services than 3G networks, will be available in October.

Korea’s mobile carriers are competing to attract customers with their new LTE services.

As of yesterday, SK Telecom had the largest number of LTE service subscribers at 2.25 million, followed by LG U+ with 1.8 million and KT, the last to join the race, with 501,000.

“It is estimated that the total number of LTE subscribers will surpass 10 million by the end of this year and we aim to secure four million subscribers this year,” Pyo said.

Meanwhile, LG U+ announced yesterday that it would spend an additional 100 billion won ($87.8 million) to roll out nationwide VoLTE service in the fourth quarter of this year.