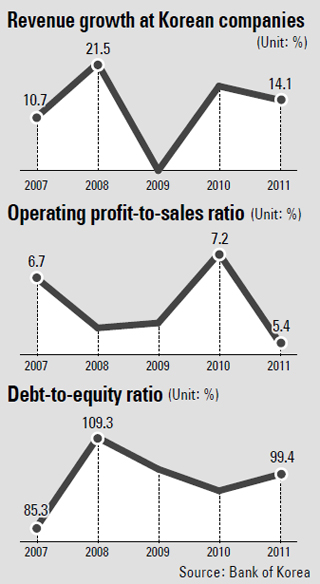 Major conglomerates like Samsung Electronics enjoyed exceptional growth last year. But for the average local company, growth, profitability and stability have worsened in 2011 compared to the previous year due to the sluggish global economy and rising commodity prices.

Most companies saw their debt-to-equity ratio rise too.

According to the Bank of Korea yesterday, the average revenue growth of more than 1,600 companies fell from 16.9 percent in 2010 to 14.1 percent last year.

Growth in total assets fell from 10.5 percent to 8.3 percent.

The operating profits-to-sales ratio fell from 7.2 percent in 2010 to 5.4 percent, revealing a winnowing of profits.

By sector, automobiles was the only area that saw operating profits-to-sales remain the same. Shipbuilding, machinery, electronics and petrochemical retreated declined from the previous year.

“A sluggish economy made it difficult for companies last year and the rising raw material crisis contributed substantially to the worsening performance,” said Yoon Jae-hoon from the BOK’s corporate statistics department.

Meanwhile companies’ stability last year worsened compared to the previous year as the debt-to-equity ratio expanded from an average of 95 percent in 2010 to 99.4 percent at the end of last year.

Additionally, companies’ dependence on loans moved up from 24.3 percent to 25.3 percent.

The central bank report announced a gloomier outlook for this year’s economic growth earlier this month.

The BOK lowered its growth forecast from the previous 3.6 percent projected at the end of last year to 3.5 percent on the basis of a weakening global economy, including slowing growth in China.