Assembly gets rep focused on rights in the North

Assembly gets rep focused on rights in the North 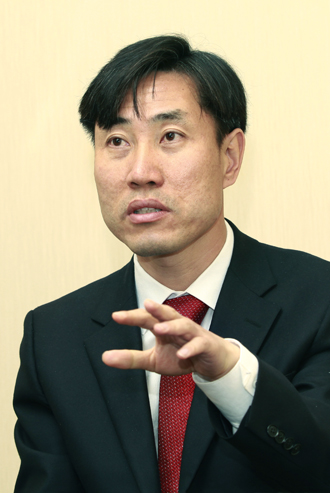 Ha Tae-keung will become the first activist for human rights in North Korea to sit in the National Assembly.

Ha, who was pro-North Korea during the pro-democracy movement of the 1980s, changed his tune after meeting North Koreans who defected to China, who told him the true state of affairs in the North. He was elected April 11 as the ruling Saenuri Party’s representative from Gijang B District of Busan, his hometown. He won 44.8 percent of the vote, more than the other three candidates.

After graduating from Seoul National University, Ha earned a doctorate degree in international economics from Jilin University in China and founded a radio station in Seoul called Open Radio for North Korea to inform North Koreans about the outside world, with financial backing by the U.S. Congress. Its transmissions are beamed across the DMZ.

Ha, 42, sat down with the Korea JoongAng Daily last week in Seoul to express his strong will to dedicating himself to raising international awareness of North Korea’s human rights violations and China’s repatriation of refugees back to the North.

“Before I became a lawmaker, I thought my own abilities and creativity were the most important things in my life,” Ha said. “But after going through the campaign, I realized how important it is to listen to other people’s opinions and live together.”

When asked why the ruling party selected him as a candidate, he said the party, which had been wounded by a slew of political scandals, needed fresh blood.

“When I was chosen as a Saenuri candidate, polls said the ruling party would win less than 100 parliamentary seats and the leadership needed new faces to reinvigorate itself,” Ha said. “So I think I was chosen to be one of the figures symbolizing the party’s reform.”

Ha said the matter of North Korean human rights issues should be spoken aloud, not silenced, and criticized South Korean liberals who have been tight-lipped on the issue and even trying to dissuade the U.S. government from putting sanctions on the North.

“Some liberals, especially members of the Unified Progressive Party, are keeping mum about whether the regime is doing right or wrong in protecting its people’s rights,” Ha said. “They even protest U.S. economic sanctions against the North.”

In dealing with China’s forceful repatriation of North Korean defectors, Ha said it’s important to up the pressure on the Chinese government.

“Currently, there’s a rift among Chinese government officials in the handling of North Korean affairs,” Ha said. “Some officials reportedly say they should curb North Korea’s military provocations, while others say ‘leave them be’ in order to stem U.S. influence in the region.

“Although the Chinese government might stop sending the refugees back for some time in the future, they could resume it anytime,” Ha said. “But I think China is worried the criticism of their repatriations of North Korean escapees could develop into anti-China sentiment. So it’s important to discuss it with the Chinese government. We should constantly watch China in regards to this matter.”

Ha said North Korean people should know about the current situation in North Korea, especially the fact that the UN Security Council strengthened its economic sanctions and the U.S. government withdrew offers to donate badly needed food aid to the regime after the failed test of a long-range rocket.

“If North Koreans don’t know the facts, they will remain hostile to the outside world and the U.S. government, not realizing that it’s their leadership that has cut off the food supply,” he said. “If they know the truth, it could be a catalyst to bring change to the regime.

As an analyst of North Korea, Ha said Kim Jong-un’s leadership style involves more communicating with his people compared to that of his father.

“Jong-un also appears to have a more ‘horizontal’ style of leadership compared to his father,” Ha said.

“According to the ruling Workers’ Party’s mouthpiece Rodong Sinmun, Jong-un holds meetings with political or military officials frequently, whereas his father unilaterally decided what should be done and ordered his people to do it.”

Ha also said the fact that North Korea officially admitted the humiliating failure of the long-range rocket launch, which exploded after liftoff on April 13, surprised him.

“The new leader apparently cares about the international community much more than his father did,” Ha said.

“Now is the early stage for Kim Jong-un,” Ha said. “How South Korea and the United States respond to his behavior will last until the end of his rule.

“We should reward good behavior and penalize bad behavior in order to tame the regime from the outset,” he said.

As a newly-elected lawmaker, Ha said he wants to build up relationships with foreign diplomats to discuss the North Korean human rights issues.

“I also want to bolster the bilateral relations between South Korean and Chinese lawmakers and discuss a wide range of diplomatic issues such as a Korea-China free trade deal or North Korean defectors,” he added. “I feel the U.S. government is still prioritizing North Korea’s military provocation over human rights abuses, which I think should be changed.”