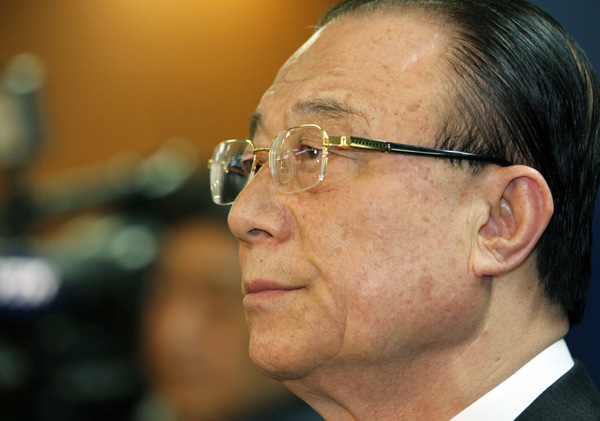 Choi See-joong, one of the closest associates of President Lee Myung-bak, at a press conference in January when he resigned from chairman of the Korea Communications Commission. Choi admitted yesterday he took bribe money and used it to finance public opinion polls for Lee during the 2007 presidential campaign. [YONHAP]


Following a revelation by a real estate developer that he had paid hefty bribes to Choi See-joong, one of the closest associates of President Lee Myung-bak, Choi admitted yesterday he took the money and used it to finance public opinion polls for Lee during the 2007 presidential campaign. 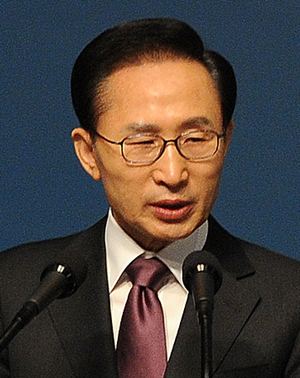 The prosecution said yesterday it recently launched a probe into the allegation that Choi, former chairman of the Korea Communications Commission, took money from a real estate developer, Lee Jung-bae, for the “pi-city” project in Yangjae-dong, southern Seoul. The businessman allegedly bribed top officials through a broker to speed up the process of obtaining construction permits, according to prosecutors.

The broker, Lee Dong-ryul, introduced the businessman to Choi and Park Young-joon, former vice minister of knowledge and economy, in late 2005, prosecution sources said. At the time, President Lee was mayor of Seoul, Choi was the head of the polling company Gallup Korea and Park was the director of political affairs for the Seoul Metropolitan Government.

Prosecutors suspect that the developer bribed Choi up to 600 million won ($526,200) from 2007 to 2008 in return for help expediting the stalled process of obtaining construction approval.

Choi made an explosive revelation yesterday that he received money through the broker and used it to fund opinion polls for Lee’s presidential campaign. But Choi denied that the money was paid to help the real estate project.

“I received the money through Lee Dong-ryul, a hometown friend,” Choi told the JoongAng Ilbo in a phone interview yesterday. “I was working for the Lee Myung-bak presidential campaign in 2007 while serving as the Gallup Korea chairman,” Choi said. “I received the money to finance the opinion polls, and it has nothing to do with the pi-city project.”

The “pi-city project” is being built in Yangjae-dong, southern Seoul. Two 36-story office buildings, a terminal, a distribution center, shopping malls and a department store are planned. By Kim Do-hoon

Choi also admitted that the broker asked him to help obtain approvals for the pi-city project around 2005, but he turned him down. “I told him that the only person I knew in the Seoul city government was then-Mayor Lee,” Choi said. “So I told him that I was in no position to help.”

Choi said he received the money from the broker after he turned down his request. “He told me that he would help me personally, so I received it,” Choi said. “I used it privately to finance opinion polls and my other personal spending.”

Choi tried to stress that the money was not a bribe in return for a business favor. “It has nothing to do with the president,” he said.


Lee Jung-bae, the developer of the pi-city project, told the JoongAng Ilbo that he spent a fortune to get a green light for the project.

He said he provided about 6 billion won to broker Lee Dong-ryul to lobby senior officials to obtain construction approval. “It is my understanding that more than 3 billion won of the money ended up going to Choi and Park,” he said.

The developer also claimed that his business rights for the project were taken away after he stopped paying the bribes in May 2008. “After I stopped paying, creditors forced me to give up the project,” said the developer. “As I resisted, they filed a bankruptcy motion to the court.”

The pi-city project was intended to build the country’s largest complex of malls, logistics centers and offices at the former site of a cargo terminal in Yangjae-dong, southern Seoul. The project began in 2004 but saw little progress as construction permits from the city government were not issued quickly. A slow economy, depressed real estate market and financing troubles further jeopardized the project, and the approval was only made in November 2009.

Broker Lee Dong-ryul went to the same middle school in Pohang, North Gyeongsang, as Choi. The broker was arrested Saturday on charges of receiving money from the real estate developer. The office and residence of the developer were raided Thursday.

It is not the first time that Choi faced a graft scandal. The 75-year-old Choi stepped down as chairman of the Korea Communications Commission in January over allegations that a former aide accepted bribes from a businessman in return for favors.

Known as the political mentor of President Lee, Choi and Lee are both from Pohang. Choi is a university classmate of the president’s elder brother and he also served Lee closely throughout the presidential primary and the presidential election in 2007.

The Blue House did not issue an official response, but it was apparent that the presidential office was shocked by the scandal and Choi’s revelation that he spent the money for opinion polls in 2007. Park Jeong-ha, the presidential spokesman, said the Blue House will wait for the investigation’s outcome.