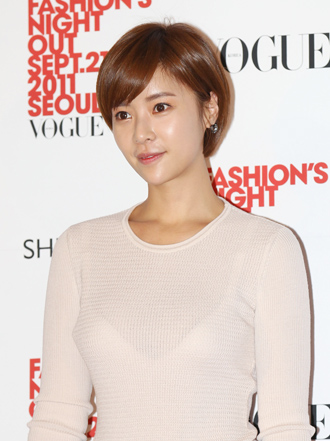 Hwang Jung-eum has been cast as the female lead in a new medical drama “Golden Time,” a representative from the actress’ agency said yesterday.

The new MBC show is set in a surgical ward; Hwang will play the hospital’s clueless heiress, who is only concerned with her ex-boyfriend.

The work is a collaboration of director Kwon Seok-jang and actor Lee Sun-gyun. The two previously worked together in 2010 on the hit drama “Pasta.”

The drama will begin filming in May and will air from July following the final episode of the program “Light and Shadow.”

In 2002, Hwang rose to fame as part of the girl group Sugar. Since the trio disbanded in 2004, she has pursued a career as an actress and has been in various hit shows from “High Kick Through the Roof” (2009) to “Can You Hear my Heart?” (2011). The actress also recently switched agencies.

“As it’s her first role since she signed up with us, we are expecting great things from her,” her agency said.