Jennifer Hudson testifies about murders that ravaged her family

Jennifer Hudson testifies about murders that ravaged her family 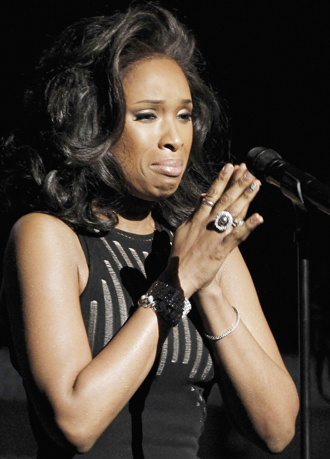 CHICAGO - Academy Award winner Jennifer Hudson, choking back tears, testified Monday how no one in her family wanted her sister to marry the man who is accused of murdering her mother, brother and nephew.

Prosecutors alleged that Balfour, also 30, who pleaded not guilty, acted out of spite after his estranged wife - the mother of Julian King - told him she wanted a divorce.

Jennifer Hudson was the first witness to take the stand on day one of the much-anticipated trial, which opened with Judge Charles Burns sternly advising jurors to reserve judgment until they heard all the evidence.

In their opening statements, prosecutors offered a chilling account of the murders, attempting to paint Balfour as a violent, cold-blooded killer who repeatedly threatened his alleged victims in the months before they died.

Defense lawyers were expected to raise questions about the relationship between Balfour and Hudson’s sister Julia.

The murders in Chicago’s South Side upended Hudson’s life less than two years after the one-time “American Idol” contestant collected a best supporting actress Oscar for her role in “Dreamgirls.”

Her testimony Monday offered little insight into the murders that shocked Chicago and garnered international attention, but they painted a picture of a close-knit family torn apart by a violent crime.

Hudson recalled how, after a frantic telephone call from her sister, she flew immediately to Chicago to identify the remains of her mother and brother and to post a $100,000 reward for her then-missing nephew.

The youngster was found shot dead and covered with a shower curtain three days later in the back of a stolen vehicle.

“We were trying everything, anything we could do to get him back,” said Hudson.

Hudson, who released her second studio album “I Remember Me” in March 2011, and sang “I Will Always Love You” in memory of the late Whitney Houston at this year’s Grammy awards, is expected to attend the entire trial.

She was accompanied to court Monday by her longtime partner, professional wrestler David Otunga. They sat together in the fourth row of the courtroom after her half hour on the witness stand.