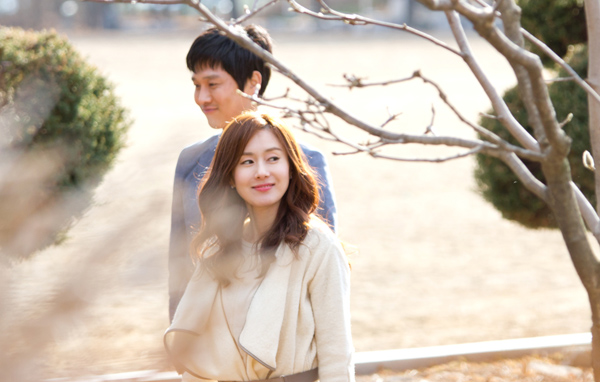 
First love, infidelity and a fake terminal illness make up a new JTBC drama, “Love Again,” which aims to mix mystery and melodrama into one juicy plot.

Based on the hit 2010 Japanese TV series, the Korean adaptation has director Hwang In-roe at its helm and a star-studded cast including Kim Ji-su, Ryu Jung-han and Choi Chul-ho.

“When the Japanese series came out, it caused quite a bit of controversy with its risque take on infidelity,” said Jung Eun-yong, a manager at Megaphone, which promotes the drama.

The new Korean version, to start airing today, begins when columnist Lee Tae-jin organizes a reunion of his middle school friends in the most unusual way - by faking a terminal illness. Before too long, however, Lee’s “joke” unravels and the group of seven friends become reacquainted after 30-plus years apart.

Two of the friends, Kim Woo-chul (Kim Jin-geun) and Park Sun-joo (Yoon Ye-hee), run away together the day after the reunion. With spouses, children and humdrum lives to deal with, the friends desperately try to balance reality with the fantasy of ending up with their childhood sweethearts.

Hwang, who directed a string of highly successful TV dramas during the ’90s, including “Foundation of Love” (1995), said that the key to this drama is the juxtaposition of the realities of middle-age romance with the adolescent fantasy of true love.

“This drama is different in that it’s a love story between middle-aged men and women as they relive their memories of first love,” Hwang said during a press conference this week for the launch of the drama. “First loves don’t usually work out, right? But first love is the source of a lot of memories and is an opportunity to learn more about yourself. People grow through their first experiences with love.”

Compared to the Japanese version, the Korean version of “Love Again” relies less on exaggeration to generate suspense, said Hwang, who extended the nine-part original into a 16-episode series for the Korean market.

The director said that he felt at home after coming back to melodrama, a genre in which he said he excels.

“Of course, I’m a big melodrama enthusiast myself, but it’s also an area I do well in. Lately, I’ve been involved in dramas that cater toward younger audiences, and it’s nice to come back to tell stories of my generation,” he said.

But he also emphasized that despite being a melodrama, in the end, “Love Again” is based on life’s realities more than anything else.

“We decided to take a slow and steady pace to depict reality and focus on those mundane things about life rather than fixating on unrealistic elements,” he said.

Even so, actor Ryu, who was also at the press event, admitted that the plot was too “lovey-dovey” for his liking at times.

“But still, I’m giving it all that I have. It’s my first drama, and I can’t emphasize enough how new this all is to me,” said Ryu, who has focused on musicals in the past.

Actress Kim was more upbeat about her role as Im Ji-hyun, a housewife who falls for her childhood love.

“It’s such an honor to be cast as a character that epitomizes the image of an ideal first love. To remain in someone’s memory as their first love is really quite a blessing, and I’m so excited to embody that ideal,” Kim said.