The public grows tired of criticism

The public grows tired of criticism

Those who rose to fame in Korea through their acerbic wit and scathing tongues appear to be falling out of favor. While they made it to the top by pushing public limits, consensus is growing that they also crossed some lines.

Pundits are saying that tart remarks that fail to set an concrete agenda or develop into constructive criticism tend to disappoint Koreans and make society turn away after a short while.

Gwak Geum-ju, a psychology professor at Seoul National University, is one of the observers who sees these incidents leading to counter reactions from the Korean public.

“The public feels vicarious satisfaction and catharsis when they hear harsh criticism about certain people or subjects, but if they are exposed to them on a repeated basis, they become desensitized and go after other provocations,” Gwak said.

She added that politicians and TV celebrities like Kim Yong-min and Kim Gura didn’t realize that the public had reached its limit.

The remarks by Kim Yong-min and Kim Gura both targeted relatively “weaker” groups of society like women, the elderly and transgenders, Gwak said.

“Criticisms targeting these groups of people are likely to trigger hostility from the public.” 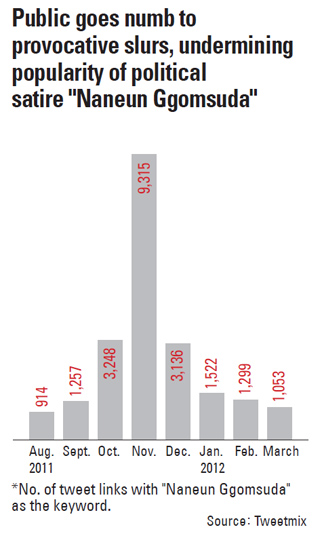 Others point out that the biggest problem of all is that these remarks “lack content.”

“People ignore provocative words that are only meant to inflame but resonate with harsh criticisms that have content and set an agenda,” said Na Eun-yeong, a communications professor at Sogang University.

Kim Yong-hak, a sociology professor at Yonsei University agrees: “Believe it or not, the Internet has a self-purification function. And I believe eventually, only the content-filled, ‘noble’ slurs will survive.”

One clear indication of how the people have gotten tired of provocative words is the evidently decreased popularity of “Naneun Ggomsuda,” or “I’m a Petty-Minded Creep.”

According to Tweetmix, which analyzes the traffic of social networking services, links on Twitter with “Naneun Ggomsuda” as the keyword reached their peak in November of last year at 9,315, but the number dropped to 1,053 last month.

“It’s clear that the popularity of Naneun Ggomsuda has waned on social networking services,” said Jeong Yun-ho, CEO of Tweetmix.

Statistics from November of last year represent the show’s peak, after it criticized the ruling party’s candidate for the Seoul mayoral by-election, Na Kyung-won, revealing that she spends a shocking amount of money on her skincare.

Amid allegations that Na was a regular customer at a skin care clinic that charges 100 million won ($89,000) for treatments, she lost the by-election to Park Won-soon.

“Initially, the show gained traction for its criticisms that had content - like Na’s extravagant skincare allegation. But recently it’s just been focused on wordplay and has failed to produce any good content. In that sense, it’s no wonder that it is no longer popular,” said Hyun Taek-su, a sociology professor at Korea University.

Some also argue that the public is increasingly critical of the remarks’ validity.

“Before people would vet the public figure through their doctoral degree, thesis or tax payments. But today one way to vet a public figure is by the validity of their criticisms,” Lee Won-jae, a sociology professor at the Korea Advanced Institute of Science and Technology.