Gov’t maps out 2013 budget to rein in pledges

Gov’t maps out 2013 budget to rein in pledges 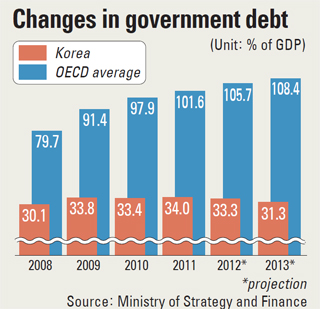 The government has approved guidelines for fiscal plans to help Asia’s fourth-largest economy balance its budget in 2013 in what is seen as a bid to counter the slew of ambitious - and expensive - welfare-related campaign pledges promised by political parties this election year.

Emphasizing that government spending should veer toward “working welfare” and “sustainable growth,” the preliminary plan outlined the current administration’s intention to restrain spending by those who replace it. It is also geared to ensure Korea has the available resources to cope with its rapidly aging population, the prospect of reunification and other economic crises that may potentially arise.

Sketched out by the Ministry of Strategy and Finance and approved by the Cabinet, Korea’s 2013 budget guidelines that were announced yesterday put fiscal health above all else. If successful, this would be the first time since 2003 that Seoul has managed to balance its budget, and only the second time since 1980.

“The reason the government is stressing a balanced budget is because it wants to prepare for a future crisis that could possibly arrive considering the high exposure [to risk] of the Korean economy, which has already experienced two past crises,” said Vice Finance Minister Kim Dong-yeon. “The aim is to preemptively secure the policies to respond to such events.”

It also seeks to extend to the first year of the next administration the “working welfare” or, “workfare” policy coined by current Finance Minister Bahk Jae-wan. This would funnel welfare support to jobseekers and discourage an overreliance on programs that do not boost employment.

“Next year’s budget will be determined by the current administration, and with the upcoming elections it will be difficult [for it] to maintain its independence [from lawmakers],” Bahk said during an interview with the JoongAng Ilbo last week.

“However, if such difficulties are overcome and a balanced budget is approved, it can regulate the new administration. Under the current law, it would not be easy to set up a revised supplementary budget [if needed].”

The finance ministry said every measure will be taken to expand the country’s revenue base next year.