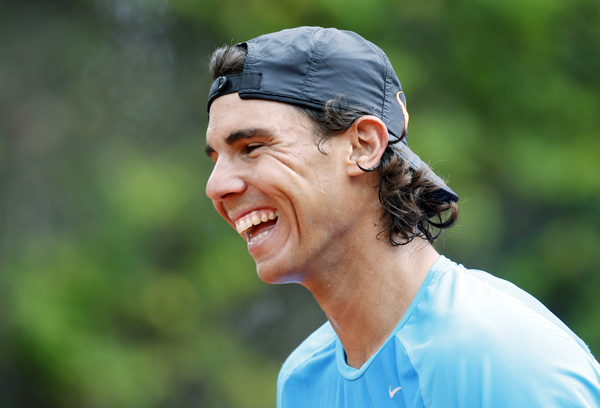 BARCELONA, Spain - The accolades continued to rain down Monday on Rafael Nadal after the Spaniard made tennis history at the weekend by winning an eighth straight Monte Carlo title by beating world No. 1 Novak Djokovic 6-3, 6-1.

But with the king of the clay now turning his attention to lifting a seventh out of eight attempts at the Barcelona Open, he’s received an unexpected morale boost from his second-seeded main rival this week, Andy Murray.

“I don’t think anyone can question the fact that Nadal is the best ever on clay,” said world No. 4 Murray, who learned his own dirt tennis in the Catalan capital as a teenager.

“You can never say ‘never,’ but his eight in a row is a record that will certainly be hard to break,” said Murray, who has played Barcelona twice (2005, 2006) but won just one match. He withdrew to let an elbow injury heal in 2011.

Nadal will aim to keep his focus this week.

“I’m only concentrating on playing well here - this is one of the nicest tournaments of the year for me. That is my challenge - not to become number one again. I’m home and this is very special to me. I’m so comfortable here.”

Murray said he wants to start improving his own record at the Real Club de Tenis, where he begins in the second round against Ukrainian Sergiy Stakhovsky, who beat Russian Evgeny Donskoy 6-2, 6-3 on Monday.

“I’d like to start winning some matches, but I’m feeling better each day on the clay. It takes me a few weeks to get adjusted to the surface,” said the 2011 French Open semifinalist. “It feels like home to me here since I trained here a lot when I was young.”

Finland’s Jarkko Nieminen, who lost a quarterfinal against Nadal here six years ago, started with a defeat of Spaniard Javier Marti 6-4, 6-1.

Less than 24 hours after crushing Novak Djokovic 6-3, 6-1 in the Monte Carlo final, Nadal was outlining his chances in Barcelona.

“Beating the number one is special, but Novak [who is mourning the loss of his grandfather last week] made more errors than usual and I took advantage of that. I did have a few mistakes with my backhand though,” said Nadal.

The top seed will open on Wednesday after a first-round bye, facing the winner from compatriot Guillermo Garcia-Lopez and Belgium’s Olivier Rochus.

Nadal said that despite trailing Djokovic in the rankings as the Serb put together a record-setting 2011 season of 10 titles including three of the four grand slams, “I had a great season last year.

“But there was a player who did better, and usually sport is fair. And at the Australian Open final, I came close to winning.”