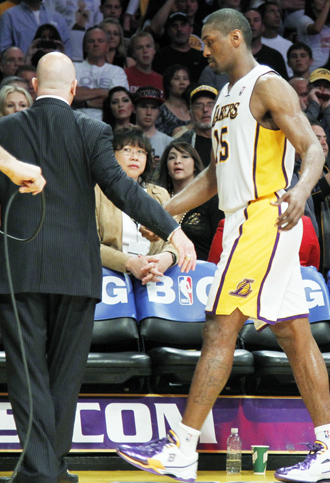 Los Angeles Lakers trainer Gary Vitti, left, escorts Metta World Peace from the court after he was ejected for double flagrant fouls against the Oklahoma City Thunder on Sunday. [AP/YONHAP]

LOS ANGELES - The Lakers jersey says World Peace on the back. The player wearing it is still Ron Artest, and he’s in trouble again with the NBA.

Metta World Peace was pounding his chest with his right arm in celebration of a dunk over two opponents Sunday when his left arm suddenly flung out, landing a vicious backward elbow to James Harden’s head and dropping the Oklahoma City guard to the hardwood.

Within seconds, the roars of the crowd fell silent as fans watched in disbelief the latest act of violence by a player who changed his name last year to promote peace.

World Peace is likely to be sidelined when the Lakers open the postseason this weekend, and possibly longer. He claims he accidentally clipped Harden while celebrating a dunk, yet given his history as perhaps basketball’s most notorious troublemaker since Dennis Rodman, not even his teammates have any idea why he lost control for an inexplicable instant.

“It was unfortunate that James had to get hit with an unintentional elbow,’’ World Peace said. “I hope he’s okay.’’

World Peace undid much of the goodwill created by his notable charity work over the past few years when he knocked Oklahoma City’s top reserve out of the key late-season game, giving him a concussion.

His upcoming suspension will be just a fraction of the 86-game ban Artest received in November 2004 when he jumped into the stands at the Palace of Auburn Hills to fight fans, precipitating perhaps the ugliest brawl in North American sports history.

Yet World Peace changed more than his name over the past three years with the Lakers. The former math major from St. John’s has devoted much of his free time to charity, even winning the NBA’s J. Walter Kennedy Citizenship Award last April, primarily for his work in mental health awareness.

“One play in the heat of a battle, all of the sudden it changes his perception as a man and as a person? No,’’ said Kobe Bryant, his teammate and tireless defender. “Everybody, all you guys, know what a sweet guy he is.’’

While the NBA’s top brass watched video of the elbow and debated the length of a suspension Monday, sports fans debated whether to give World Peace another chance. Some saw his actions as an ill-timed celebration that accidentally hurt a player standing too close, while others thought the Lakers forward should be suspended indefinitely, perhaps even banned from the NBA for a dangerous lack of impulse control.

“During that play, I just dunked on [Kevin] Durant and [Serge] Ibaka, and I got really emotional and excited,’’ World Peace said in a 30-second statement afterward, refusing to take questions in the Lakers locker room.

“The Thunder, they’re playing for a championship this year, so I hope that he’s okay, and I apologize to the Thunder and to James Harden. You know, it was such a great game, and it was unfortunate so much emotion was going on at that time.”

The prolific tweeter gave a bit more insight about the elbow later that night.

No matter what the NBA does to World Peace, his rebuilt image has taken another big blow. His actions also added a layer of irony to his decision last September to change his name, including a first name he claims is a traditional Buddhist term denoting kindness and friendliness.

Until World Peace leveled Harden with what appeared to be a precise elbow to the head in a key game for both teams’ playoff plans, some fans might have nearly forgotten the image of Artest throwing punches at a fan in the Detroit suburbs seven years ago, mistakenly thinking that the fan had thrown a drink at him while he played for the Indiana Pacers.

While Harden rolled in agony on the floor, his teammates confronted World Peace, who appeared ready to fight Ibaka. World Peace then spoke with the officials, appearing to mime an argument that he had simply been celebrating with a chest pound that missed its target, before they ejected him for a flagrant foul.