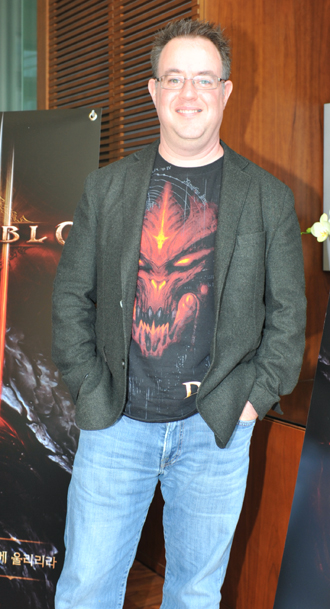 Despite their alarmingly rapid growth, games designed for smartphones will not replace those made for online use on PCs but rather offer gamers a more diverse range, according to Jay Wilson, game director of Diablo III.

The man responsible for the long-awaited online game - like its predecessor, Diablo II has enjoyed blockbuster sales since it was released a decade ago - also stressed that it is the contents that people are attracted to not the platform.

“However, each one gives me a different experience.”

“The game industry is very different from most media industries like TV, movies, magazines or newspapers, [where the] content doesn’t really change,” he said.

“There are a lot of gaming experience that a console or a PC offers that smartphones can’t, and vice versa,” Wilson said.

As a game developer, it is crucial to choose the correct platform to offer the best experience for users, he said.

“We really think about the games we want to make first, and then we think about the platform. Because at the end of the day, people go for content not platform,” he added.

However, he admitted that the potential for collaborating with developers that focus on smartphone content could be endless.

Regarding the success of the third installment of the classic role-playing game (RPG) Diablo III, he said the Korean market was one of the biggest for its developer, U.S. company Blizzard Entertainment.

“If you look at all the major game markets in the world, Korea definitely ranks up there,” Wilson said. “So we really want Diablo III to do well here and we feel like the game is well suited to the Korean market.”

Among the more popular and coolest features of Diablo II, he named the traditional Korean weapons that featured as items that can be collected along the way. “We repeated that theme and expanded it a little for Diablo III,” Wilson said. “We want elements that players feel familiar with.”

Wilson is a highly acclaimed game director at Blizzard, which he joined in 2006.

The company is famous for its globally successful online games including the World of Warcraft, Starcraft and Diablo series. Wilson was in Seoul ahead of Diablo III’s official launch, which is scheduled for May 15, to promote the online role-playing game’s first beta test in the Korean market.

Diablo III is set in the dark-edged fantasy world of Sanctuary, which has been dramatically reworked, and will feature some repeat characters.