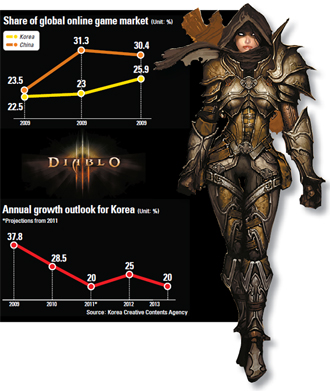 A five-star hotel in Seoul turned into a virtual bloodbath yesterday as journalists splattered pixelated zombies without mercy while sampling the highly-anticipated online game Diablo III, which will be released next month.

The next installment of Blizzard Entertainment’s hugely successful role-playing game (RPG) series comes over a decade after Diablo II was launched. The U.S. software developer’s original came out in 1996.

Additionally, Korea’s NCsoft will start its own beta testing of Blade & Soul later today, its latest contribution to the RPG segment. The game, which has been developed since 2007, has even captured the attention of Jay Wilson, the game director of Diablo III, who said he cannot wait to see what it looks like.

The online game market here has been hungry for fresh meat since Blizzard released Starcraft II in 2010 - another series that has proved a phenomenal hit in the Korean online game market since it first appeared in the late 1990s.

Online games still dominate most of the game industry here. According to the Korea Creative Content Agency, they accounted for 64 percent of the total game market as of 2010.

Demand for online games in Korea has been enjoying average annual growth of 20 percent and the market expects this double-digit expansion to continue until 2013.

However, the online game industry has been struggling in recent years as the market lacked new releases to wet gamers’ appetites.

The recent boom in smartphone games has also surfaced as a new threat to the industry.

“This year, the local market for games on platforms like mobile and social networking sites is expected to expand 24 percent to 465 billion won [$407.7 million],” said Sung Jong-hwa, an analyst at Etrade Securities. “Although this represents just 6.5 percent of Korea’s online game market, which is worth 7.1 trillion won, mobile and social networking games will see much higher growth than online games in 2013.”

Since 2008, Korea has surrendered its position as the world’s largest online game market to China, which may soon be in a position to grab half of the global market share.

NCsoft, the nation’s leading game developer, is expected to see its revenue slump and profit downsize in the first quarter of this year from the corresponding period in 2011.

According to a report from LIG Investment & Securities, NCsoft’s revenue will likely dip 1.6 percent to 153 billion won while its operating profits will nosedive 50 percent to 19.3 billion won. The developer will announce its first quarter’s performance next month.

“Its revenue is unlikely to surge until the third quarter,” said Chung Dae-ho, an analyst at LIG Investment & Securities.

As public interest in online games shrinks, MBC Game, a channel exclusively devoted to e-sports and online game competitions by professional gamers, shut down earlier this month after a decade in business due to financial problems. It now airs music videos and live performances.

“No other games can provoke a turnaround right now except for Diablo III or Blade & Soul,” said one industry insider. “Although their ultimate reception and the ramifications remain unknown, interest in them at present is exceptionally high.”