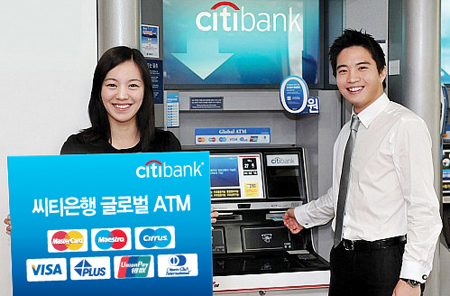 Citibank Korea has globalized all of its ATMs and waived fees for using ATM services so that foreign customers in Korea can easily use cards issued overseas.


In an effort to offer the best possible service to its international customers, Citibank Korea has globalized ATMs at all branches in the country and waived fees for using global ATM services. This way, foreigners in Korea can easily use cards issued outside of the country at Citibank ATMs.

Previously, cash withdrawal services using cards issued overseas were available only at so-called global ATMs, not at all ordinary ATMs. Many foreign visitors in Korea reported that this setup was unnecessarily inconvenient. In direct response to this feedback, the bank globalized its ATMs, a move expected to benefit a large number of customers.

For the same reasons, service fees that were previously charged for global service at ATMs are now waived by Citibank. Other banks in Korea charge at least $3 when customers use global ATM services.

Citibank hopes that, combined, these changes will contribute to the satisfaction of visitors to Korea, especially as the country is expected to see a substantial number of visitors from the rest of the world with promotions like the 2012 “Visit Korea Year.” Jeju Island, recently selected as among one of the seven new wonders of the world, and the upcoming Yeosu Expo should also be major tourist draws.

An official of Citibank Korea expressed hope that the ATM changes will serve as an opportunity for the bank to take a step forward in proving to potential customers around the world that the company is genuinely a global bank. He added that the bank took the initiative in adding global service features to all of its ATMs and waiving global service fees in order to bring more convenient service to its global customers. The move also helped strengthen Citibank’s commitment to the local community as a bank with the largest global network across the globe that is also the most Korean bank in the local market, he said.

And Citibank hasn’t stopped at ATMs in its efforts to provide better service to foreign customers. Several bank branches have been specifically designated as being ready to serve international customers. Citibank’s Internet and mobile banking platforms are now also available in English, enabling Citibank’s foreign customers to take advantage of the latest in home banking technology. And should there be any problems, an international call center with foreign language service is now available.

Citibank opened its first branch in Korea in 1967 and reopened as Citibank Korea Inc. (CKI) after merging with KorAm Bank in 2004.

CKI serves customers at 221 branches (as of 2011) in Korea by providing first class financial products and services based on the various products and know-how of Citi with a global network including 199 years of history and 200 million customers in more than 160 countries.