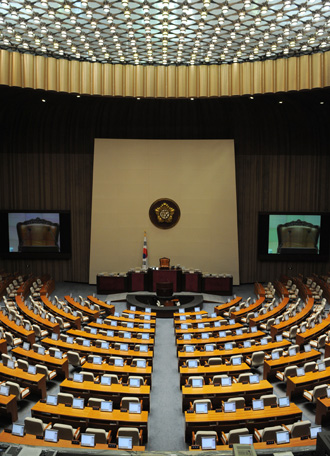 The outgoing National Assembly yesterday called off the plenary session planned for the day, putting in doubt the fate of a much-touted bill aimed at preventing violence in the legislative body. The ruling Saenuri Party and the main opposition Democratic United Party had planned to hold a one-day plenary meeting to pass dozens of key bills before the National Assembly ends its term on May 29. The rival parties canceled the planned session, however, after failing to narrow differences on details of the bill aimed at promoting compromise and preventing physical scuffles in the legislature. The fate of about 60 other major bills was also thrown into uncertainty. Unless the bills are handled before the Assembly’s term expires, they will be automatically scrapped. [NEWSIS]