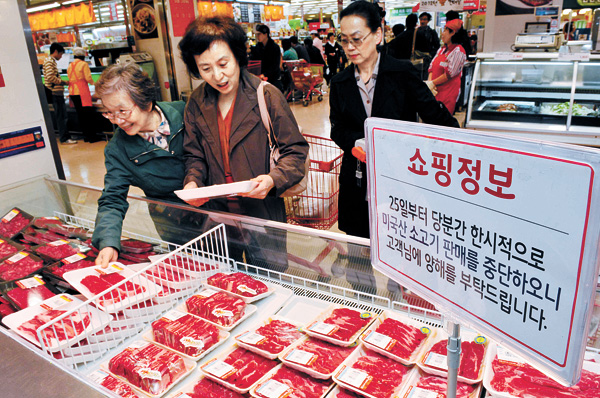 A sign at Lotte Mart’s Seoul Station branch informs customers that sales of U.S. beef were temporarily suspended starting yesterday after a new mad cow disease case was reported in California on Tuesday. The government announced yesterday it would do quarantine checks on all U.S. beef imports. [NEWSIS]


The Ministry for Food, Agriculture, Forestry and Fisheries said it started quarantine checks on all U.S. beef imports yesterday after the first case of mad cow disease in six years was confirmed in a dairy cow in California.

Previously, the ministry conducted inspections on 3 percent of beef imported from the United States.

The ministry, however, said it would not immediately halt customs clearance of U.S. beef, which would slam the door on imports.

Bloomberg reported yesterday morning that the ministry would halt customs clearance of U.S. beef imports quoting a ministry official, but the ministry clarified the situation later.

“We haven’t taken steps to halt customs clearance of imported U.S. beef because we currently have limited information about the cattle,” Yeo In-hong, a senior ministry official, said in a press briefing. “We have requested the U.S. government to give us further details about how old the cow was, whether it was infected through feed or not, and we’re awaiting their response. We will take further necessary measures after we get a response from them to prevent possible trade friction.”

Yeo added it will take weeks to get the full response and that’s why the government decided to inspect all U.S. beef.

The latest case of mad cow disease, or bovine spongiform encephalopathy, is the fourth in U.S. history.

The Roh Moo-hyun administration completely banned U.S. beef imports in December 2003 when the disease was found at a farm the state of Washington in 2003.

The Lee Myung-bak government resumed U.S. beef imports in 2008, sparking a tsunami of anxiety, anger and candlelight vigils across the nation, which became the administration’s biggest crisis.

Under a bilateral agreement in April 2008 with the United States, Korea only imports U.S. beef from cattle under 30 months old and without specified risk materials (SRM) like spines, which are thought to have a higher risk of transmitting mad cow disease. 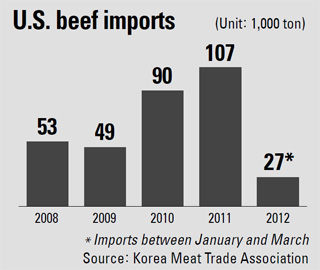 Last year, the U.S. was the second largest beef importer to Korea after Australia, which shipped 145,170 tons.

In March, a total of 9,300 tons of U.S. beef was imported, outpacing Australia’s 9,100 tons and much smaller amounts from New Zealand, Mexico and Canada.

Local discount chain stores including Homeplus and Lotte Mart quickly reacted to the news, saying they would temporality halt sales of U.S. beef.

“There’s no problem with the U.S. beef we have in stock because it all passed quarantine checks,” said a Lotte Mart employee. “But we decided to temporarily stop putting it on the shelves to reflect the public’s growing concerns over American beef.”

E-Mart and other retailers said they will make a decision on whether to temporarily stop selling U.S. beef after monitoring the government’s reactions.

“We have to wait and see how the Korean government will react to this issue because it hasn’t yet made a decision to halt quarantine checks on American beef,” said an industry source who spoke on condition of anonymity.