To Sunday: This is the solo show of Michael Craig-Martin, 70, who is often called a pioneer in the world of conceptual art.

Most of the works on display are paintings of big alphabet letters and everyday objects such as a can, a lightbulb and a hanger rendered in vivid colors such as pink and yellow. The show features 19 of his latest paintings and one sculpture: a three-meter-high (10-foot-high) blue hammer of steel.

He created the paintings by arranging around 200 computer-generated images of objects and filling them with some of his 20 favorite colors.

Asked why he is working with a limited number of words, colors and images, he said at a press conference last month, “We use only a few words among many. Still, we can make subtly different meanings. It rings true for my works.” 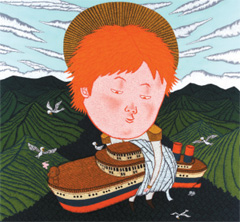 To May 5: This solo exhibition of Kang Ji-man, a 37-year-old local artist, features his latest paintings.

Kang’s paintings are composed of clear lines, vivid colors and humorous human and animal figures that have some cartoon-like qualities. In most paintings, a character named Eolkeuni (which means a guy with a big face) appears. He represents an ordinary person with a stressful daily life.

The works have been painted with seokchae, or Korean traditional pigment made of ground stones. The texture of the artist’s paintings has become thicker in more recent works.

The exhibition is open from 10 a.m. to 7 p.m. Tuesdays to Saturdays.

Admission is free. The gallery is located on the third floor of the Nature Poem building near Cheongdam Intersection. Go to Cheongdam Station, line No. 7, exit 9, and walk for 10 minutes.

To May 12: This solo show by one of the world’s most controversial artists, Paul McCarthy, features his “Nine Dwarfs” sculptures in K3, Kukje Gallery’s new exhibition building.

The nine dwarfs are cast in silicone rubber, each of a strong, basic color such as red, yellow or blue. The pieces seem to be adapted from the cute, kid-friendly characters of Walt Disney’s animated film “Snow White and the Seven Dwarfs”(1937). But they’re not quite child-friendly and have been twisted into a very grotesque fairy tale.

The dwarfs have distorted shapes, with some parts seemingly crushed or broken and scattered on their pedestals, and appear phallic, arousing delicate unease from viewers.

Put together, the nine dwarfs are part of the “White Snow” (not Snow White) series by the 67-year-old American artist.

Sex and politics have always fascinated the artist during his 40-year artistic career, and his portfolio clearly shows his fascination. His works are related to questions about “the issue of equality and the position of the patriarchal male today,” the artist said during his visit to Seoul in early April.