Yeosu Expo expected to be safe and secure

Yeosu Expo expected to be safe and secure 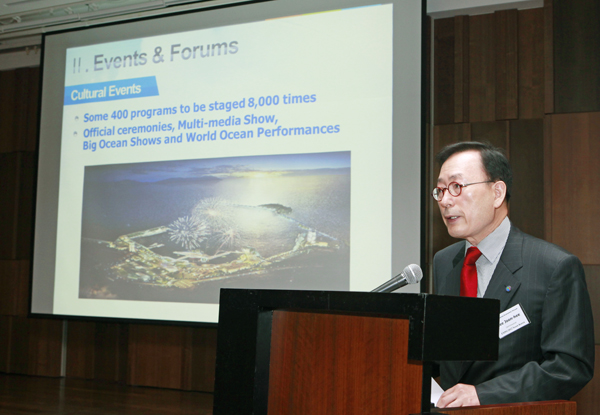 
With its grand opening less than 20 days away, the organizers of the Yeosu Expo expressed confidence that the international event will be safe and secure throughout its 93-day run.

Cho Yong-hwan, chief of public relations for the Organizing Committee for Expo 2012 Yeosu Korea, said at the Korea Economic Forum yesterday that a special task force comprised of the officials from the security-related government agencies is working relentlessly to prevent terrorist attacks after the North’s recent threat against the South.

He said the organizing committee is also working with a task force to keep at bay a possible terrorist plot targeting the expo.

“We can’t go into detail how, but we are thoroughly prepared for terrorist attacks,” Cho said at the forum held at the Shilla Hotel, central Seoul. The Korea JoongAng Daily hosted the event.

The expo, to be held on 2.71 million square meters (670 acres) of the site, will bring together 105 countries and 10 international organizations in Korea’s small southern port city of Yeosu.

North Korea, which participated in the previous expo held in Shanghai in 2010, is not among the countries confirmed to attend as of yesterday, the organizers said. Cho said the organizer has considered inviting the North through various diplomatic channels, but no decision has been made yet.

The expo site is almost ready to open on May 12, according to the organizers, but a fire broke out at the International Pavilion on March 14, raising safety concerns. It was the second fire after one in January.

Cho said the fires surprised them, but he said they have become a chance to improve the safety measures at the expo site. The measures against possible sea-related safety accidents are being thoroughly prepared in cooperation with the police and the intelligence authorities, he said.

About the accommodation, he said only 29 percent of all visitors expected to come will find lodging facilities in Yeosu, the city of around 300,000 people.

But, he said adjacent regional, municipal governments are fully cooperating in providing accommodation for the Yeosu visitors, and all of the visitors will be able to commute to and from the venue within 90 minutes from where they stay.

The Ministry of Land, Transport and Maritime Affairs said yesterday that visitors will be able to find lodging within one hour from the site on non-holiday weekdays.

It said 36,000 rooms will be needed to accommodate the visitors every day on average during the expo period and there are 43,000 rooms within a one-hour radius. But on the weekends or holidays, the number of rooms needed will increase to 102,000 and they will be found within a 90-minute radius, it said.

Cho said foreign guests will be able to get support for securing accommodation in advance if they contact the organizing committee by email or through its official Web site.

In a presentation of the overview of the expo, Lee Joon-hee, commissioner of Expo 2012 Yeosu Korea, said the expo will leave a lasting legacy with main landmarks of the expo to remain as permanent tourist attractions.

“We envision the entire expo site will be transformed into ocean resorts, shopping centers for marine-sports lovers and the center of the region’s marine leisure industry,” Lee said.