Free Jedol: How a chubby dolphin touched every species

Free Jedol: How a chubby dolphin touched every species 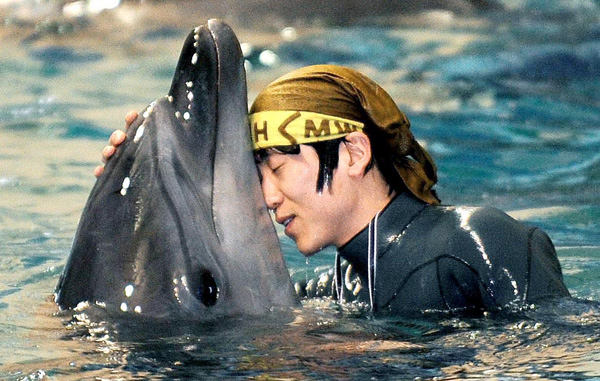 The Seoul Grand Park Zoo hangs up chunks of meat with special equipment so that its lions stay alert.[JoongAng Ilbo]


On March 19, the dolphins at Seoul Grand Park became unemployed for the first time in 28 years. Five bottlenose dolphins at the nation’s longest-running aquarium show were relieved of their duties after Seoul Mayor Park Won-soon suspended the program.

The Seoul Metropolitan Government’s initiative also detailed the eventual release of Jedol, the chubbiest dolphin of the five, into the sea near Jeju Island. It was revealed that Jedol had been captured illegally three years ago.

The Free Jedol saga has shed light on animal rights in Korea. From the fates of Seoul’s five beloved dolphins to the procedures of the Seoul Grand Park Zoo, activists have stepped up their fight for all animals, regardless of the species.


Friends of the sea

It only lasted one month, but for the dolphins at Seoul Grand Park, the cancellation of shows shook up their daily routine dramatically. Jedol and his friends no longer found themselves leaping through hoops or flipping in the air.

Over the past two decades, the dolphins have become the most popular attraction at Seoul Grand Park, with a total of 949,000 people having watched the show last year.

The park still runs 10-minute live sessions with the dolphins three times a day, but these are comprised only of lectures detailing the characteristics of the mammals and swimming. All tricks and performances have been abolished.

The decision came after the Seoul mayor accepted claims made by some civic and animal rights groups that Jedol was illegally captured and sold to the city-run Seoul Grand Park, located in Gwacheon, Gyeonggi.

“I once debated whether it was right for me to meddle in the issue of sending back a dolphin to the ocean, but I came to the conclusion that it is an issue that reminds us of reviewing the relationship between humans and animals,” Mayor Park said last month.

“I will help Jedol swim around the sea of Jeju against the backdrop of Mount Halla and the Gureombi rocks.”

In fact, two other dolphins were illegally captured along with Jedol. Korean law strictly bans the unauthorized seizure of dolphins and whales. Both will remain at the zoo, however, as they are considered too old to be released back into the ocean.

Hwang Hyun-jin, the head of an online community called Hot Pink Dolphins that advocates animal rights, said she thinks the entire practice of dolphin shows should be shut down.

“Dolphins swim up to hundreds of kilometers per day in the wild. But these dolphins are used in moneymaking businesses,” Hwang said.

“They are considered the second-most intelligent creatures after humans. Do you think they would be happy to jump to get a chunk of dead fish? Where they should be is not a narrow show venue but the sea, where they were born.”

Jedol arrived at the zoo when he was 10 years old and has been living there for three years. The average dolphin lives for 25 years.

Before the dolphin’s release into the ocean, Jedol will have a year of adjustment training in order to learn how to capture prey and adapt to the cold seawater.

An open training camp will be set up in the sea of Jeju Island. The Seoul Metropolitan Government estimates the project will cost about 870 million won ($756,521).

When the final 10-minute session ended last Tuesday, the audience of 2,000 slowly filtered out. But Jedol and the other dolphins didn’t budge; the pod gathered at the front of the pool, heads popping out of the water. Trainers used to stand there and give signs, instructing them to perform flips as the paying customers left.

When two trainers approached, the five soared into the air, clapping their flippers with the trainers’ hands as if they were giving high-fives. The gesture signaled they were done for the morning, and free to swim on their own.

And soon, Jedol with be free for the rest of his life. Instead of shoddy pools with chipped paint and chlorinated water, Jedol is heading back to the wild in a couple of months. He has already changed the lives of his fellow dolphins at the Seoul Grand Park, and his legacy will change the culture of dolphin shows on the Korean Peninsula.

The story of Jedol has also extended to the rights of animals living next door - at the Seoul Grand Park Zoo.

Everland Zoo says many of its facilities are designed for the benefit of its animals. Below, a hot spa available for Japanese monkeys during the wintertime. Provided by Everland Zoo

The issue of animal rights in Korean zoos has been brought into the spotlight. Some activists say zoos should be shut down altogether. These establishments are outdated relics of modern history that exploit rare animals and boast national strength, they argue. Others have a more limited goal: abolishing animal shows.

A report entitled “Sad Zoo” was published back in 2001 by the Korean Federation for Environmental Movements after the civic group inspected Seoul Grand Park. According to the report, the zoo is failing because it doesn’t consider the natural habitats of its animals.

Many were kept at jail-like facilities with concrete-paved floors that were built to easily clean animal feces. As a result, a lowland gorilla, which is on the verge of extinction, had festering toes upon inspection.

Some animals continuously plucked their skin through the day in an unnatural fashion, causing harm to their bodies.

“I still remember one gorilla, which was spitting at me and other visitors. He even threw chunks of his dried feces at us. I thought he was mad,” said Lee Eun-jeong as she recalled her visit to the Seoul Grand Park in early 2000.

“People were excited about the gorilla because he was way different than the other inactive animals. People laughed out loud and shrieked at him and it riled him even further.”

The “Sad Zoo” report was a shock for people like Lee, who paid for regular visits to the zoo. After the report came out, Seoul Grand Park, which accommodates 3,200 animals with 320 species across 196,000 square meters (2.1 million square feet), vowed to replace its iron bars with better facilities.

Officials said they wanted to bring the wilderness back to caged animals starting in 2003. A two-story deck was built for giraffes so that they could eat naturally. However, in a recent visit to the zoo, it was difficult to spot any animal moving.

But Jo Hee-kyeong, president of the Korean Animal Welfare Association, one of the civic groups that took to the streets to free Jedol, said she is not convinced of the benevolence of these acts.

“I think such programs are devised just for show,” Jo said.

“Concrete floors have been replaced with soil-covered floors and iron bars have been pulled out over the past 10 years. The park just added changes to the exterior of living quarters.

“In fact, the most dreadful moment for these wild animals is when they have to make eye contact with people. What they need are cozy places where they can hide themselves, but what they have are damp back rooms with concrete floors.”

Jo added that living conditions of other small- and medium-sized zoos are much worse. Aside from two major zoos - city-run Seoul Grand Park and Everland, operated by Samsung Group - others are short on budgets.

“Only strong breeds are kept by major zoos. Weaker ones, often a product of inbreeding, are sold to small- and medium-sized zoos where their rights cannot be guaranteed,” she said.

A small zoo located near Mount. Chiak in Gangwon is notorious for mistreating its animals.

Once, tigers and bears starved for weeks when the zoo was facing financial difficulties. Animals there still live on pet foods.

Others have different takes on the role zoos play, saying they can function as the best education tool for many children and also contribute to animal research and preservation.

“I think the zoo should function as ‘Noah’s Arc’ in the future by maximizing its research and preservation functions,” Mo added.

Despite the uproar over the illegal capture of Jedol, dolphin shows are still functioning in Korea. While Jedol is preparing to return to his natural habitat, the fate of his species - and animals in all zoos across Korea - is less clear.