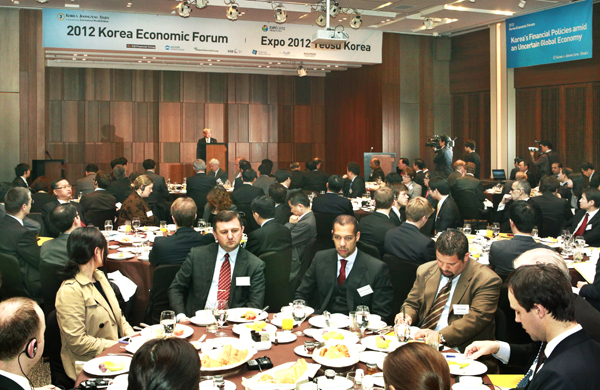 More than 140 delegates from the financial, business and IT sectors attend the Korea Economic Forum at Shilla Hotel in Seoul yesterday. By Park Sang-moon

“The role of the government on financial oversight and regulation will likely expand,” Kim said at Shilla Hotel in Seoul yesterday.

He was invited as the keynote speaker of the Korea JoongAng Daily’s Korea Economic Forum, which this week celebrated its sixth year. Kim’s speech was entitled, “Korea’s financial policies amid an uncertain global economy.”

He said the global economy has flourished under 40 years of new liberalism while the fruits of capitalism have become widespread.

Talking about the global economy as a whole, he said, “New liberalism, which advocates market autonomy as its highest value, has served as a solid background for the expansion of the financial industry.”

However, this heavy emphasis on chasing profits above all else has seen too much wealth concentrated among certain groups and led to polarized income classes, social ills that need to be redressed, he added.

“New liberalism has also undermined the safety of the world financial market due to excessive autonomy and the relentless pursuit of profit,” Kim said.

“Additionally, minimal government intervention has resulted in repeated financial bubbles, and this has led to small and large economic crises,” he added.

“The financial paradigm will likely shift away from maximizing market autonomy and toward autonomy more in synch with market regulations.”

Kim said the direction of reforms now being pushed in Korea, including the strengthening of banks’ soundness, tighter regulation of financial firms and improvement of the international accounting system, all demand the government play a greater role.

But the government needs to refocus its financial policy, which has until now been focused on stabilizing and developing the financial industry, he said.

“On top of this basis framework ... we plan to create, as a first step, a legal framework to better protect financial consumers and establish an exclusive institution to follow up on this,” he added.

The disparity among income classes was brought to the fore globally after the 2008 credit crunch as people lost their jobs, homes and financial assets. This led to resentment against the riches being amassed within the financial industry and movements like Occupy Wall Street.

“As a result, the credibility of the financial industry was badly damaged,” Kim said.

The FSC chairman said there is a strong possibility that new liberalism will be replaced by a paradigm that centers more on economic stability where the role of the government and the private sector will be reworked.

“The Korean government has been closely monitoring the fundamental changes in the global economy and financial paradigm after the global crisis, while also preparing for a new vision for managing the [domestic] economy,” he said.