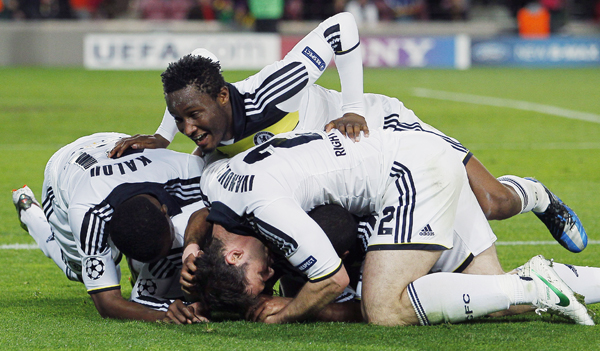 Frank Lampard, right, and his Chelsea teammates celebrate during their Champions League second-leg semifinal football match against Barcelona at Camp Nou stadium, in Barcelona, Spain, on Tuesday. Chelsea advanced to the finals with a 3-2 aggregate score. [AP/YONHAP]


BARCELONA, Spain - Lionel Messi walked off the Camp Nou pitch in tears, as one of the most dominant eras in European club football came to a crashing halt.

He wasn’t the only one shaking his head in disbelief.

Despite going a man and two goals down in the first half, Chelsea pulled off one of the unlikeliest comebacks in Champions League history on Tuesday, earning a 2-2 draw against Barcelona that sent the London club into the final 3-2 on aggregate and eliminated the defending champions.

For the second time in two weeks, Chelsea withstood a continuous onslaught from the Spanish giants and displayed ruthless efficiency when their rare opportunities finally presented themselves.

“It’s a historical night for the club [and] I believe we deserve to be in the final,’’ said Chelsea’s interim manager Roberto Di Matteo, whose team will face either Bayern Munich or Real Madrid in the May 19 final at Munich’s Allianz Arena. “We had a difficult season but we seem to always get something special out when we need to. That’s part of the DNA of these players.’’

For Barcelona, the result could mark the end of one of the most successful spells in European club football. The team was bidding for a third Champions League title in four years, and this loss came right on the heels of a 2-1 defeat to Real Madrid that all but ended its hopes of a fourth straight domestic league crown.

With coach Pep Guardiola yet to decide if he will stay at the club, it means his reign could end without a major this year - although the Copa del Rey is still up for grabs as a consolation.

“It hurts to lose this way because we were better and we gave it our all,’’ said Barcelona midfielder Cesc Fabregas. “We needed the perfect game but we weren’t perfect because we lacked goals.’’

Despite coming into the second leg with a 1-0 lead, Chelsea’s hopes had looked all but over after going down 2-0 and having captain John Terry sent off for a needless foul in the first half.

But Ramires’ audacious lob right before halftime gave the advantage back to the Blues on aggregate, and the Spanish giants never found a way to recover after the break.

After Messi blasted a penalty against the crossbar and hit the post with another shot, substitute Fernando Torres netted in injury time to make it 3-2 on aggregate and ensure that Chelsea reached the May 19 final.

While Chelsea’s players celebrated, Messi trudged off the field with his head buried in his shirt.