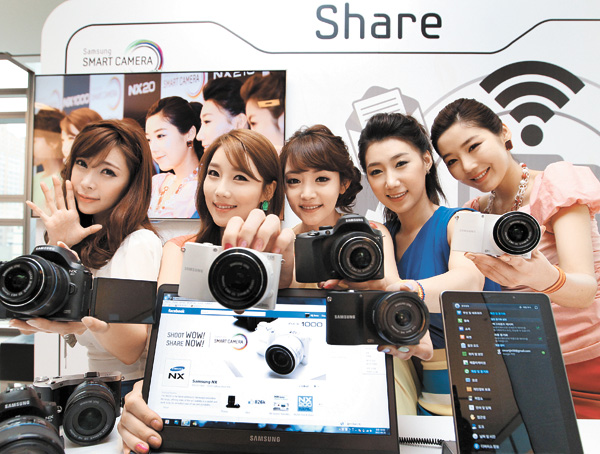 
Samsung Electronics’ “How to live smart” slogan used to refer to the company’s range of smart TVs.

The company says it is the first in the world to release a Wi-Fi-enabled mirrorless camera.

A mirrorless camera, which does not have a mirror-based optical viewfinder, is much smaller and lighter than DSLRs but carry similar high-end features.

The Internet connection will make it possible for users to send photos to smartphones or to social media such as Facebook without having to transfer photo files to a computer.

“In the past, when cameras were hugely popular, they were mostly for the sake of recording things and events,” said Han Myoung-sup, senior vice president of the digital imaging business at Samsung, at a press conference at the company’s headquarters in southern Seoul.

“But times have changed. Now consumers have a huge aspiration to express themselves through their photos. Photography has now evolved into a means of communication.”

Samsung is planning to release five more smart camera models in the first half of the year.