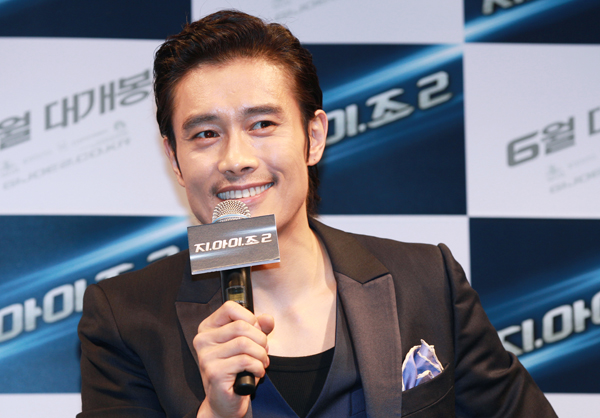 
With his second Hollywood film “G.I. Joe: Retaliation” slated to open in theaters this June, Hallyu superstar Lee Byung-hun spoke frankly about his foray into the biggest film market in the world.

“Every day during filming, I came on set nervous,” Lee confessed during a press conference for the new film in Apgujeong, southern Seoul, this week.

“In Korea, if an actor is injured or sick, the production can be delayed and there is some leniency. However, in Hollywood, because the budget for films is enormous, even if you are injured, you still need to be on set as the film schedule is very precise.”

In the film, a sequel to 2009’s “G.I. Joe: The Rise of Cobra,” Lee reprises his role as Storm Shadow, the ninja bodyguard of Cobra Commander, the film’s terrorist organization leader. Compared to his relatively small role in the first film, the sequel features a deeper portrayal of Storm Shadow and his conflicted stance in his loyalty to both Cobra and G.I. Joe. As with the first movie, Lee stars alongside some of the biggest names in Hollywood, including Bruce Willis, Channing Tatum and Dwayne Johnson. 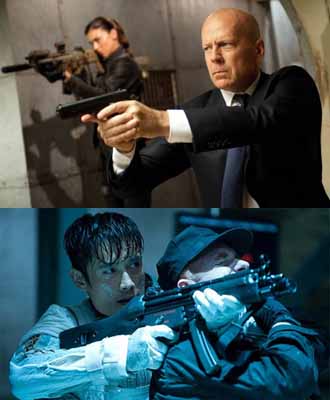 The actor, best known for his weighty film roles including in “I Saw the Devil” (2010) and “Joint Security Area” (2000), admitted that he at first thought his character was “quite silly,” but after reading up on his history, he was charmed by the “lonely, melancholy fighter aspect” of Storm Shadow.

Lee’s venture into Hollywood comes after those of other Korean superstars, including Jang Dong-gun’s 2010 Hollywood debut in “The Warrior’s Way,” which failed at the box office and received poor reviews.

When the Korea JoongAng Daily asked Lee whether he feels that his role in the new film feeds the stereotype of knife-wielding Asian fighters in Western blockbusters, the actor replied noncommittally.

“To be honest, I didn’t decide to play this role in the ‘G.I. Joe’ series because I felt the role was 100 percent to my taste, but rather because I was chosen for the role,” Lee said. “I think roles like these are something I have to go through to introduce myself in this market .?.?. I want to portray this character in a multilayered way so that later on I can be in the position to choose the roles I want to play.”

Regardless, the actor’s foray into North America has been well received, and Lee was recently chosen, along with fellow Korean actor Ahn Sung-ki, to be the first Asian actors to leave their hand prints at Grauman’s Chinese Theater in Hollywood. His co-star, Bruce Willis, also praised the Korean heartthrob, saying in a recent interview with MTV, “[Lee] showed some action moves that I could never do ... I want to make another movie with him if I ever get the chance.”

There was one struggle, though, that Lee said made him feel as if none of his success in Hollywood even mattered.

“Whenever I got feedback from the staff on set about my Korean accent while speaking English, my mind went blank and I forgot all my lines,” he said. “In those moments, it felt as though I was a newcomer to this scene all over again.”

He was also unaccustomed to the diehard fandom that follows many of Hollywood’s trademark films, with audiences wielding influence on producers’ decisions about their films.

Lee said he was startled when fans petitioned against revealing Storm Shadow’s face in the film, even threatening to boycott all G.I. Joe-related toys, comics and films if they didn’t get their way.

But even regarding this, the actor said he has now adjusted.

“The franchise is such a well-known, popular one and has been for decades, so I understand their point,” he explained.