‘The Raven’ would have Poe clawing at his coffin

‘The Raven’ would have Poe clawing at his coffin 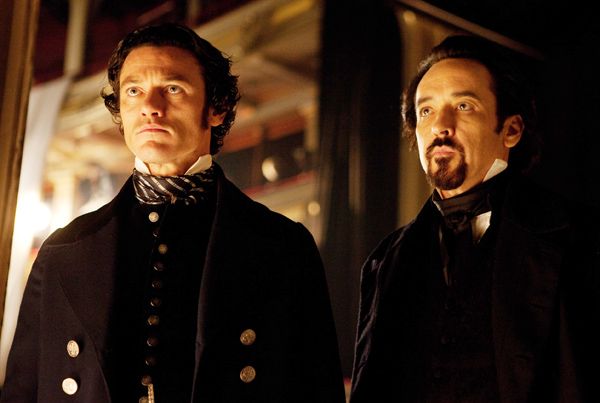 Luke Evans portrays Detective Fields, left, and John Cusack portrays Edgar Allan Poe in a scene from the gothic thriller “The Raven.” The featherheaded film leaves much to be desired. [AP]


What would Edgar Allan Poe be doing if he were alive today? Clawing at the inside of his coffin, desperate to get at the people who used and abused his ingenious, diabolical tales as the basis for the pile of cinematic bird poo that is “The Raven.”

Poe was a dissolute American author of dark short stories and poems who died in 1849 as a drunken wreck of a man but whose work has remained popular.

Like carrion feeders themselves, the filmmakers peck and gnash at Poe’s stories to fill out a plot that sounds sort of cool in concept - a serial killer using the author’s fiction as a blueprint for ghastly murders - but is featherheaded in execution.

John Cusack makes a terrible Poe, the somber role as one of literature’s great tortured souls spotlighting his limitations as an actor (and perhaps consigning to premature burial the far better casting possibility of Robert Downey, Jr. ever getting to play Poe, a part in which he has been interested for years). Hollywood is not likely to resurrect the author again as long as “The Raven’’ remains freshly fetid in people’s minds.

With his little goatee and his black cape, Cusack vaguely looks the part, but he is a lightweight - voice too whiny, mannerisms too exaggerated, cadence too reedy to bring alive the movie’s frequent passages of Poe’s lyrical writing.

Other than some stylishly gothic visuals crafted by director James McTeigue (“V for Vendetta”), “The Raven” is an unimaginative mess whose superficial appropriations of Poe’s devilish yarns are deeply unworthy of the author.

An introductory sequence establishes Cusack’s Poe as a garden-variety drunk: scruffy, squabbling, egomaniacal and perpetually penniless. Yet his popular stories of the macabre and his darkly romantic poetry keep him in favor with the ladies of Baltimore society - particularly with beautiful heiress Emily Hamilton (Alice Eve), whom Poe hopes to marry.

Screenwriters Hannah Shakespeare and Ben Livingston then pull a “Saw” on Poe, taking the modern torture-porn franchise’s idea of savage gamesmanship by a serial killer and imposing it on poor Edgar.

Baltimore police detective Emmett Fields (Luke Evans) enlists Poe to consult on a double homicide after recognizing it as a copycat of the author’s “The Murders in the Rue Morgue.” Soon, they are faced with a pile of corpses dispatched in methods borrowed from “The Pit and the Pendulum,” “The Cask of Amontillado” and other Poe stories, the taunting killer forcing the author to play along to end the slaying spree.

“The Raven” reinforces how fiendishly clever Poe was. The premises of his stories still resonate as a source of Americans’ modern collective nightmares - and as an endless source for Hollywood to plagiarize in contemporary horror tales.

Yet Poe’s stories also highlight how lame a reimagining McTeigue and his collaborators have come up with. Rather than taking Poe’s ideas and running wild, the filmmakers wring nothing more than a few moments of gore from them. They add no suspense or scares to Poe’s images, apply no originality to his plot devices.

When “The Raven” finally gets around to revealing its mastermind, the bad guy is like an afterthought, as if the filmmakers suddenly realized they needed to unmask the killer and cast the first mildly menacing actor who walked through the door. “The Raven” offers up one of the dullest mass murderers ever.

There are obvious comparisons between “The Raven” and Downey’s “Sherlock Holmes” franchise, which gave a makeover to Arthur Conan Doyle’s great detective. Poe’s mysteries were a precursor to those of Conan Doyle, who perfected the genre.

It would be nice if Hollywood could return the favor, if some of the spirit of dumb fun of the new Holmes flicks might rub off on “The Raven.”

But it’s just a bore - quoth the raven, “Go see something else.”

“The Raven,” a Relativity Media release, is rated R for bloody violence and grisly images. Its running time is 110 minutes, and it barely etches out one and a half stars out of four.