The economy recorded its slowest on-year growth in two and a half years in the first quarter, the central bank said yesterday.

Despite this, the country has not been derailed from its recovery track, the Bank of Korea said, as it moved quickly to allay fears of another speed bump on the road to sound financial health.

The BOK said the economy expanded 2.8 percent from the first three months of last year. This was the smallest improvement since it inched up 1 percent in the third quarter of 2009.

The central bank attributed the latest dip to a distortion caused by exceptional growth in early 2011. It also highlighted the fact that the economy improved 0.9 percent on-quarter, marking a significant upswing from the 0.3 percent negative growth recorded in the previous quarter. 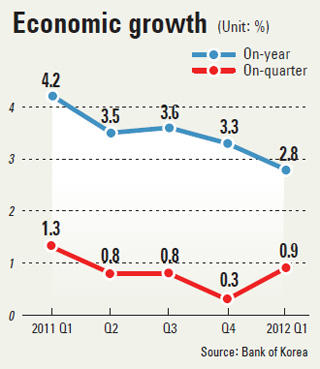 “Economic growth has slowed to 2 percent but this is largely because of the substantial expansion seen a year earlier,” said a BOK official. “The economy is on the path to recovery. As such, the economic growth outlook of 3.5 percent for this year still stands.”

The bank revised down its outlook from 3.6 percent to 3.5 percent earlier this month, but this was still slightly higher than other international agencies, including the Asia Development Bank, which put forward a figure of 3.4 percent.

Other economists agreed with the central bank’s analysis. “Growth looks poised for a recovery in 2012. The sequential upturn in the first quarter print from the previous quarter reflects stabilizing business conditions and a strong government stimulus package,” said Ronald Man at HSBC’s global research department.

“But don’t be caught off guard,” Man added. “Household consumption remains weak and needs to pick up for growth to be sustained, especially as public spending eases in the second half of the year.”

Increases in private and government spending as well as in facility investments are expected to have a positive impact on the economy.

Spending from the private sector saw a modest growth of 1.6 percent from a year earlier, largely centered on computers and medical products.

Companies’ investments in facilities and plants increased 9.1 percent in first three months of this year.