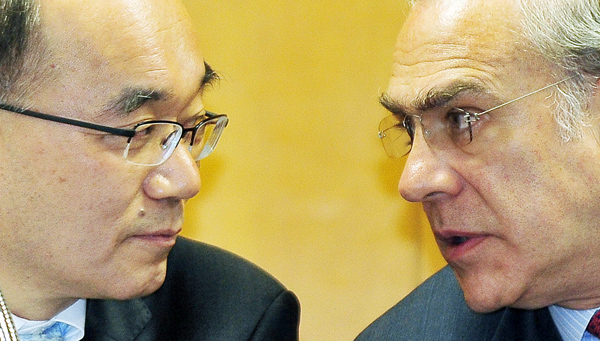 
‘It’s very good that Korea continues to grow at 3.5 percent.’

The Organization for Economic Cooperation and Development (OECD) revised down its growth outlook for the Korean economy by 0.3 percentage points to 3.5 percent yesterday citing the negative impact of weaker-than-expected global economic conditions.

“A medium-sized open economy like Korea needs vibrant trading partners that are growing fast. [But] Europe is probably going to have slightly negative or flat growth, while the U.S. is growing very modestly,” Gurria said. “It’s very good that Korea continues to grow at 3.5 percent and [is expected to grow] next year by upwards of 4 percent.”

“Korea emerged from the worst global downturn since the Great Depression with one-third of the average unemployment and one-third [of the] average public debt-to-GDP ratio in the OECD,” he said.

He urged Korea to raise its interest rates once economic uncertainty ebbs and allow the won to appreciate to counter inflationary pressure. He also advocated expanding childcare to encourage more female participation in the workforce, and suggested the country move away from mandatory retirement while also addressing income gaps. “[Income] inequality is measured by how many times the bottom ten percent of income fits into the top ten percent of income. For Korea, it’s ten times, mildly above the OECD average of nine times,” said Gurria.

“The problem is that inequality in the whole world is increasing, leading to [protests in] Tahrir square, Plaza del Sol, Occupy Wall Street, etc. Korea has been able to avoid this with relatively high growth and low unemployment and [by] fighting inequality. My only recommendation would be ‘stay the course.’?”

On the subject of geopolitical risk, Gurria counseled that, “Korea has to be doubly cautious with fiscal accounts [and] debt.” This is because the existence of North Korea “adds an element of uncertainty,” he said, not to mention the possible cost of reunification.