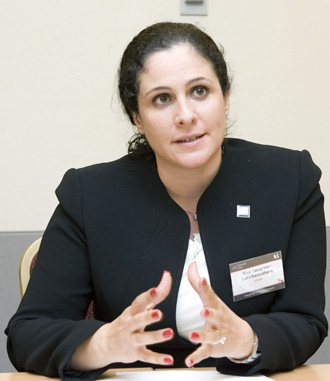 From GPS-enabled sunglasses to digital umbrellas, Koreans will use more mobile-connected devices per capita than any other country by 2020, the Global System for Mobile Communications Association (GSMA) said on Tuesday.

The GSMA said there will be 24 billion mobile connections in the world by that date presenting a $4.5 trillion market opportunity for companies that adopt mobile technology into their business models.

Koreans are estimated to own more than 10 such devices within the next decade as the nation’s legions of early adopters move to embrace a digitally ubiquitous living environment.

“We estimate that South Korea will be a country that has the world’s highest share of the number of connected mobile devices per capita in 10 years,” said Ana Lattibeaudiere, head of the GSMA’s connected living program, during a press conference at the Connected Living Asia Summit at COEX in southern Seoul on Tuesday.

“In that research, we talk about [how Koreans will use] 11 mobile devices person in 2020. And when I say device, it doesn’t only necessarily mean handsets or tablets. It could be anything from your car to your sunglasses and umbrella,” she said.

“I think you can compare [Korea] to the United Kingdom, as we estimate Britons will use between three to four mobile devices. But in Korea you have [so many] early adopters who embrace innovation.”

Lattibeaudiere gave an example of a connected lifestyle where a digitally connected vehicle will automatically be able to call for help in the event of an accident and provide positioning information for emergency services.

The key point is how to make the most of this opportunity, she added.

“We can only achieve true vision and revenue opportunity if we have collaboration between industries,” Lattibeaudiere said. “We need innovative business models, but above all, we need to think about the user’s perspective [and their desire not to have to think] how to connect [their] devices.”

She said health-related services will be a major driver this emerging market, with this segment alone predicted to reach nearly $7 billion in 2017.

Giving the example of people with sleeping disorders, she said patients would no longer have to visit a clinic once a month as doctors could remotely monitor their sleeping patterns using connected mobile devices.

“You can do it at your home, and the cost of doing this is much smaller than if you to go to a hospital,” she said, adding that Korean laws would first need to be amended so people could “take advantage of remote monitoring to monitor their own health.”