Posco staff get to ditch plant for temple treks

Posco staff get to ditch plant for temple treks 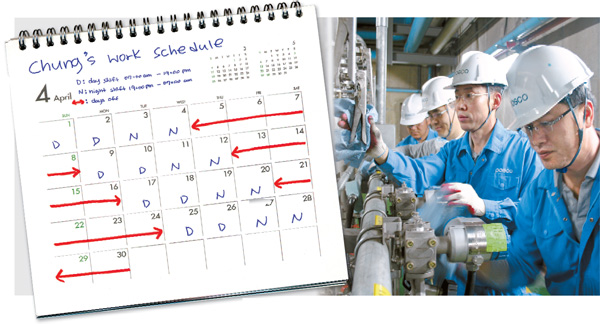 
Chung Byeong-won, in his 26th year at Posco Steel Works in Pohang, North Gyeongsang, feels like time is flying these days due to his improved work schedule.

The 52-year-old employee at the cold-rolled steel manufacturing plant was climbing Mount Palgong in Daegu at 10 a.m. yesterday - on what is now part of his normal workweek.

“Today is the second day of my four-day rest. I am on the way to Donghwa Temple on Mount Palgong with my wife,” Chung said while hiking.

At the same time, Yoon Hee-jin, also in his 50s and who has spent the last two and a half decades at the plant, said he was about to turn on the car engine to attend a company workshop on his day off. Posco regularly holds such workshops for its employees on their days off for purposes of education and entertainment.

Plant workers in the steelmaking, shipbuilding, construction and refining industries are on a mission to keep their plants operating around the clock. They operate according to different work schedules from regular full-time employees who work from 9 a.m. to 6 p.m.

Heavy industry businesses in Korea have been mulling measures to ensure their employees’ quality of life these days, while maintaining productivity and efficiency at maximum levels. Korea’s steel giant Posco has found a practical solution that has so far satisfied thousands of employees at its plants and, surprisingly, improved productivity.

Until 2011, workers at Posco’s steel mills in Pohang and Gwangyang, South Jeolla, were unable to see their loved ones while they were awake at home due to eight-hour rotating shifts.

“Sometimes my dad would be sleeping next to me when I woke up to go to school, and at other times, he went to work when we were about to have dinner,” said Lee Eun-seo, a 10-year-old daughter of Posco employee Lee Kyung-ho in Gwangyang.

It has been little more than a year since Posco workers at all of the plants started working on the new schedule.

Before then, employees at a single plant were divided into three groups who worked for eight hours a day, five days a week. Under this schedule, Posco employees work for 1,920 hours on 262 days a year. The three groups were on a rotation to work either in the morning, afternoon or night.

Now there are four groups for each plant that work for 12 hours a day. Two of the groups come to work in the morning and work until night. The other two start working at night, replacing their morning shift colleagues. Under this system, they work an extra four hours, but the number of working days a year is reduced by 87.5 because they get four days off after working four days. The total working hours are the same as before.

The main difference here is that Posco employees work for a longer time on a daily basis, but get more holidays on an annual basis.

The steelmaker first tried out the shift work system at 16 plants in the Pohang and Gwangyang steel mills in July 2010. As the first trial turned out to be a success, it expanded the system to 29 plants in October. Subsidiaries like Posco Chemtech and Posco Power joined the change, as did some subcontractors.

“When we were trying it out two years ago, there was some backlash and opposition due to concerns about the 12-hour work time,” Chung said.

Six team members led by Chung grumbled that completing eight hours was not an easy task, not wanting to imagine working for four more hours.

According to the new work schedule, the six members start working at 7 a.m., take a one-hour break at noon, then complete the remaining six hours in another post.

Chung said taking an hourlong break after lunch helps relieve fatigue and restore his condition for the next six hours.

“We were able to adopt the new system successfully because we conducted prior research to predict and address possible problems,” said Chung.

One issue he singled out as being in need of further improvement is the handing over of work when people take their days off.

“Sometimes there are some difficulties catching up with work in progress after we come back from our four-day holidays, and it is also quite cumbersome to transfer my duties to other team members,” he said.

Another veteran worker Yoon said working for 12 hours requires employees to take care of their health. “To work for 12 hours at the workplace is physically demanding. We need to be tense and take responsibility, and stay in good health in order to prevent accidents,” he said.

Posco provides healthcare programs for plant workers, such as measuring obesity rates and offering them regular opportunities to exercise, according to Yoon.

The biggest demerit of working 12 hours for four days and taking four days off is that the system requires the company to hire more employees.

Chung gave an example. “When I take the one-hour break after lunch, one of us should replace me during my break time,” he said. Chung’s team hired one more member to make the new system run smoothly.

The new system helped the steelmaker improve productivity. According to Posco, the percentage of defective products at the Gwangyang steel mill has been lowered from 1 percent to 0.6 percent since late 2010.

Posco is not the first to adopt the system. Yuhan Kimberly, the country’s leading diaper manufacturer, introduced it in 1997. The company said the number of diapers rose from 15,100 per hour in 1994 to 53,600 in 2011, while the percentage of defective ones dropped from 14 to 1.8 during the same period.

However, other heavy industrial companies are not planning to follow the move.

Hyundai Motor runs the so-called “10-10 work hours.” Morning shift employees start working at 8 a.m. and finish at 5 p.m., but are required to work overtime for two additional hours. Night shift workers come to work at 9 p.m. and leave at 8 a.m. the next morning, also including an extra two hours.

The automaker’s labor union and management have been negotiating on the shift work system since last year. The union wants to change the system by cutting the number of working days, while the other side maintains this can only follow improved productivity.

“A shift work system [like Posco’s] needs more employees, but we already have a big enough workforce compared to other automakers,” said an employee at the automaker.

On a side note, Korean refiners said they are not considering embracing the system as refining oil requires high levels of concentration and any slips can result in accidents.