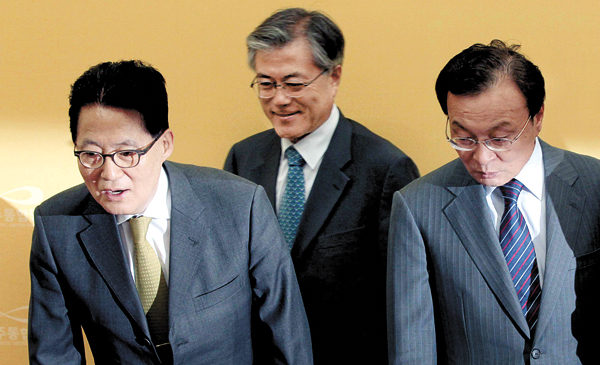 
After reports that leaders of the two largest factions in the Democratic United Party have reached a deal on splitting leadership positions before a party convention, criticism rose in the opposition party yesterday over the return of political wheeling and dealing.

“It was a decision to unite the Roh and Kim factions for the sake of a December presidential election victory,” the source said.

Park served as the DUP’s floor leader for one year from May 2010 and has exercised strong influence over representatives from Jeolla and Kim Dae-jung loyalists. Lee, who won the April general election to become the first lawmaker to represent Sejong City, is from Chungcheong and a key leader of Roh Moo-hyun supporters.

Park told the JoongAng Ilbo that Moon first approached him with the idea. “When we met on Tuesday night, Moon brought up the idea of the floor leader,” Park said. “I told him that I had already served in the post and dismissed it.”

But Lee contacted him again, Park said, and the two met over breakfast on Wednesday. Lee proposed that the DUP be led under the split system and that he would serve as chairman while Park serves as floor leader. Park turned down the proposal again, but he eventually conceded because Lee won an endorsement of the plan from a group of liberal civic activists, philosophers and religious leaders, Hope 2013, Victory 2012 Roundtable.

“The roundtable, which guides the DUP spiritually for the presidential victory, endorsed it,” Park said. “And the idea is about ending the confrontation between the Roh and Kim factions. So I thought I should not be an obstacle.”

The plan appeared to be a strategy for the DUP to overcome its shortcomings, learning a lesson from the general election defeat, in order to challenge the Saenuri Party’s frontrunner Park Geun-hye in the presidential race.

The arrangement, however, faced angry resistance from other senior politicians who were preparing for the leadership elections. They said the deal was a return to old, conventional wheeling-dealing.

“It is a collusion based on hegemonic control,” Kim Han-gill, a contender for the party chairmanship, said yesterday. “If it is true that a few politicians made an attempt to secretly divide leadership positions among them, the attempt would never be approved by the public no matter how hard they try to sugarcoat it.”

Candidates for the floor leadership race also condemned the move.

Another contender, Representative Jun Byung-hun, criticized the deal. “I have a serious concern that the floor leader election would become a closed-door collusion,” he said. “Every single lawmaker is an independent, constitutional entity. Anyone who attempts to use the lawmakers as a tool to satisfy their greed for power will face serious consequence.”

Smaller factions inside the party also had meetings to decide what they should do. A group of reformist lawmakers is supporting Woo Sang-ho as the new chairman and Yoo Ihn-tae as the floor leader.

Concerns also rose that the arrangement would influence the transparency and fairness of the DUP’s presidential primary. The floor leader to be elected on May 4 will oversee the chairmanship election.

“The presidential victory is important, but they must not treat the lawmakers as pawns on a chess board,” a senior lawmaker of the DUP said. “The proposal is a set-up on the precondition that Moon will be the DUP’s presidential candidate. Will other contenders accept that? This is an undemocratic decision blinded by the desire for victory.”