Sohn Hak-kyu to be questioned on buying votes

Sohn Hak-kyu to be questioned on buying votes 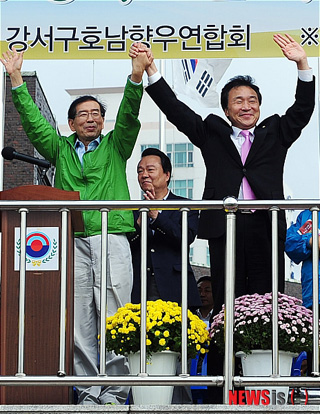 Sohn Hak-kyu, former Democratic Party chairman and potential presidential candidate, will be questioned on allegations that he tried to buy votes in last year’s by-election.

The Seoul Central Prosecutors’ Office Wednesday launched a probe into the former head of the DP and said that Sohn allegedly distributed cash envelopes during the Oct. 26 Seoul mayoral by-election campaign to party members in order to buy votes for then-independent candidate Park Won-soon.

Prosecutors said they verified the allegations and will summon Sohn as soon as he returns from his business trip to Europe. The prosecution said in October 2011 when he chaired the DP, now the Democratic United Party, Sohn allegedly had a meeting with 30 party members in his office right before the by-election and told them: “Please help Park because he is struggling with attracting votes from Jeolla-born citizens in Seoul as an independent candidate.”

At the time, Park, a renowned civil activist and lawyer, won the primary against the DP candidates, but refused to join the DP and declared his candidacy as a liberal independent. North and South Jeolla provinces are strongholds of the DP.

Prosecutors said they questioned three of the 30 members who were at the meeting, and they confessed to prosecutors that they “received envelopes that contained one million won ($878) each.”

An aide to Sohn, Choe Gwang-wung, was indicted without detention on Wednesday, prosecutors said, on charges of illegal campaign practices.

“As we confirmed the allegation that Sohn gave cash envelopes, we will launch a probe,” a prosecution official said. “We will start questioning him as soon as he comes back.”

Sohn is visiting several countries in Europe, reportedly to get ideas on social and labor programs to develop his pledges as a potential presidential candidate of the DUP. Prosecutors also found another party member involved in the case, but the member surnamed Seo fled. Prosecutors are still looking for him.