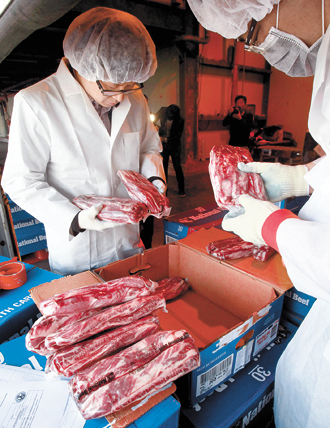 Quarantine officials examine beef imports from the United States yesterday at a quarantine station in Gonjiam, Gyeonggi. The government will checking 30 percent of all U.S. beef, up from the current 10 percent. By Kang Jung-hyun

Opposition politicians tried to whip up an anti-U.S. beef frenzy following the discovery of a mad cow disease-infected dairy cow in California.

But the public reacted so calmly that at least one retail chain that suspended sales of U.S. beef backtracked after only a few hours.

Homeplus, one of the two large discount stores that suspended U.S. beef sales Wednesday morning changed its mind after nine hours and resumed sales at 7 p.m. The store’s decision came after the Ministry for Food, Agriculture, Forestry, and Fisheries said it would not stop imports of U.S. beef but would strengthen quarantine checks.

“We resumed displaying and selling U.S. beef at our stores following the government’s announcement that there is little possibility that the infected beef has been imported to Korea,” said an official from Homeplus.

Lotte Mart, the other store that suspended U.S. beef sales, continues to keep its supply in its freezers.

“We’re waiting for the right time until public trust over the mad cow disease case is restored completely,” said an official from Lotte Mart.

“The government promised [in May 2008] that it would suspend imports of U.S. beef right away if [additional] mad cow disease was found,” said Park Jie-won, a DUP Supreme Council member. “It should keep its word.”

Lee Ji-an, deputy spokeswoman of the UPP, also criticized the Lee Myung-bak government, saying, “because it is under pressure from the U.S., it is risking the health of its people.”

The Blue House dismissed the attacks as being political.

“The government’s foremost priority is people’s health,” said Blue House spokesman Park Jeong-ha. “We insisted earlier on that the government would immediately suspend imports only if mad cow disease detected in the U.S. threatens national health but there are no grounds for believing that at present.”

Agriculture Minister Suh Kyu-yong also said in a press briefing yesterday that the infected cow was a dairy cow over 30 months of age. Korea only imports U.S. beef from cattle under 30 months and with so-called specified risk materials, such as spines, excised. To alleviate public concern, Suh said the government will strengthen quarantine measures by checking 30 percent of all U.S. beef imports, up from the current 10 percent.

He also dismissed doing any political favor for the U.S.

“The government’s decision puts the priority on the people’s health and safety,” he said. “There were no political considerations.”

Along with Korea, major export markets for U.S. beef including Canada, Japan, and the European Union were open to imports as of yesterday as the U.S. government said there was no danger infected meat would enter the food chain. Indonesia, however, halted imports from the U.S. The Southeast Asian country accounts for 0.6 percent of U.S. beef exports.

U.S. Secretary of Agriculture Tom Vilsack said, “The positive response from trade partners was a sign of confidence in the preventative measures taken by the U.S.” He said the U.S. “is not concerned about a potential cut off in imports.”

Vilsack said he sent a letter to 20 major trading partners yesterday “to reassure that the products they’re buying are safe.”

“Our investigation is ongoing, but here are a few things that we do know for a fact: It is perfectly safe to eat beef and drink milk without concern about BSE,” Matt Herrick, an official at the Department of Agriculture, told Yonhap News Agency.

“This detection should not affect U.S. trade and we will continue to work with our trading partners, including South Korea, in a transparent manner,” Herrick said.