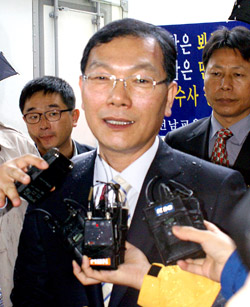 Just a week after the court handed down a jail sentence for controversy-stricken Seoul Education Chief Kwak No-hyun for bribing an election rival, yet another superintendent, this time in the South Jeolla education office, faces bribery charges.

Chang Man-chai, 54, superintendent of the South Jeolla Office of Education, was arrested Wednesday night on the suspicion of accepting bribes, prosecutors said yesterday. The Gwangju District Prosecutors’ Office said Chang, after his term began in June 2010, received two corporate credit cards from two doctors who were also his high school colleagues and charged 60 million won ($52,799) on the cards.

One of these friends was appointed as a board member of a middle school in South Jeolla, and Chang allegedly moved the friend’s wife, who was an educator, to a better job at a different school.

Prosecutors also discovered the student ID number of his other friend’s daughter saved in his cell phone. She passed examinations at a prestigious high school, and they suspect that Chang might have had a hand in her getting accepted.

Chang, who served as the fifth president of the Sunchon National University in South Jeolla between October 2006 to April 2010, also faces charges of receiving some 40 million won from an education company and diverting the money from school funds.

Chang, however, denied the allegations and said yesterday, “I apologize to the South Jeolla citizens and educators for the inconvenience. But unlike what the prosecutors state, there were no bribes and the truth will be revealed. I received the money out of goodwill and never requested it.”

His words echo that of Kwak, the 58-year-old superintendent of the Seoul Metropolitan Office of Education, who in February stated, “I gave the money as a goodwill gesture with no strings attached.”

Kwak received a jail sentence of one year from the Seoul High Court on April 17 for bribing a rival to drop out of the election for his position in June 2010, overruling an earlier court decision in January fining him 30 million won.

He claimed afterwards that he was innocent of charges that he bribed his former election rival and that he had no intention of quitting his job as education superintendent.

Yesterday, members of the Korean Teachers and Education Workers Union and other supporters of Chang gathered in front of the Gwangju District Prosecutors’ Suncheon branch office to protest his arrest.

Other citizens expressed their surprise at the allegations, as Chang swept into office in 2010 with promises of progressive policies. One Gwangju official stated, “Right after the election of the superintendent, he emphasized to civil servants the importance of being continuously upright and ethical. If the charges are true, Chang would have been speaking hollow words, like the empty bottom of a magpie’s belly.”