Homeowners a soft touch for Downy but rivals fret

Homeowners a soft touch for Downy but rivals fret 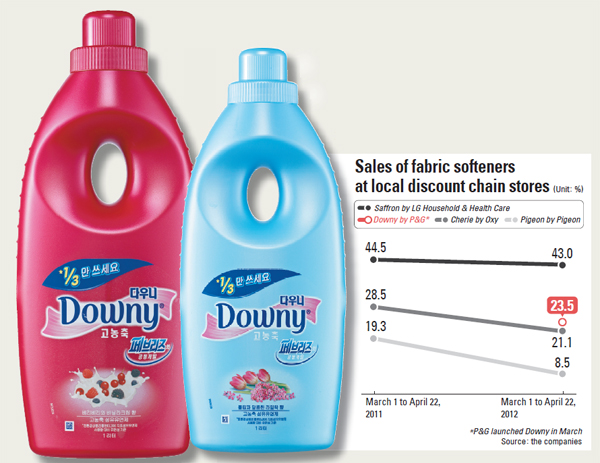 Korean consumers have embraced U.S. fabric softener Downy, which has jumped to the runner-up spot in several discount chain stores just two months after it hit the market.

According to statistics by one local discount chain store, Proctor & Gamble’s Downy controlled 23.5 percent of the domestic market from March 1 to April 22. Pigeon claimed 8.5 percent and Cherie held 21.1 percent.

However, Saffron, made by LG Household & Health Care, kept its iron grip on Korean households by posting a 43 percent stake.

Market watchers said Downy was able to achieve so much so quickly because it already had a strong consumer base here. Korean homemakers tend to obsess over imported household items and they were already able to get their hands on the product at discount stores like Costco and E-Mart before it was officially released, they added. The stores got it on their shelves by signing contracts with third party importers before P&G Korea began importing directly in bulk this year.

Local Internet communities that feature product reviews by homemakers have also been awash with glowing praise for the product in recent weeks. “Our fabric softener has perfumed microcapsules that stick into the fibers of clothes,” said a spokesman for P&G Korea.

“When it is rubbed, the capsule slowly releases more of its fragrance, which makes the scent last longer, and that differentiates us from our competitors.” P&G Korea said it released Downy with three scents - vanilla cream & berries, tulip & lilac, and white tea & lily - after conducting market research here.

The product’s arrival has spurred stronger competition as manufacturers aggressively launch promotions at local discount chain stores to stop the rot as they lose their market share and hemorrhage profit.

LG Household & Health Care, the leading producer of fabric softeners in Korea, is now offering 1 liter?(33 ounce) of Saffron as a free gift for consumers who buy a 2.5-liter bundle. It previously offered 300 grams as a free gift.

“Some manufacturers may be unhappy about Downy’s arrival, but we appreciate the lower prices, not to mention the broader choice,” said Ahn Mi-yeong, a 32-year-old company worker. “We hope more imported fabric softeners get brought in to further lower prices.”

“Saffran doesn’t contain perfume capsules, so no capsule shells stay on your fabrics,” runs the message. Furthermore, “it doesn’t have preservatives and will not irritate your skin,” it promises. Downy, the world’s first-ever fabric softener for household use, was released in the United States in 1961.