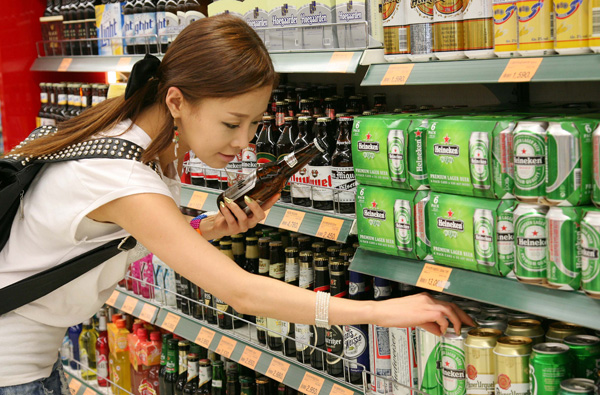 A consumer checks out imported beers at a local discount chain store in Seoul in this file photo. [JoongAng Ilbo]


Gone are the days when young Koreans were satisfied with two local beers, Cass and Hite, accompanied by side dishes of dried squid and seaweed.

Now it is easy to find a pint of Guinness on tap in fashionable Seoul nightspots like Hongdae or Gangnam, and fried chicken is more likely to be at the top of the menu.

Meanwhile, franchise bars such as Wa Bar have even set up shop near City Hall to offer tired civil servants a choice of over 90 foreign beers from as far afield as Austria, South Africa and India.

Imported beers accounted for 4.5 percent of the total beer market last year, up 0.6 percent from 2010. But even though traditional watering holes are called hofs in homage to the German word for beer hall, or hofbrauhaus, foreign beers have only recently been growing in popularity in a country that has rapidly embraced Western culture in recent decades.

Until three years ago, they owned just 2 percent of the market. Now retailers and beer manufacturers here are zeroing in on the changing tastes of local consumers and their developing taste for richer hops and malts.

Retailer Homeplus said it will expand its selection of beers from 141 last year to 230 in 2012 as it places its faith in the domestic market’s clamoring for diversity and quality.

The new target demographic includes people like Lee Ye-seul, a 32-year-old company worker who studied in Europe and the United States.

“I don’t like Korean beer because it’s too watery and fizzy,” said Lee, who frequently heads to Wa Bar after work. “That’s why many Koreans including my boss mix it with soju to compensate for the taste.”

Beyond flavor of the month

The company already distributes Guinness Irish stout but that’s not enough anymore to cater to people’s wide-ranging tastes, it said.

Budweiser accounted for almost a quarter of all imports to rank as the top-selling foreign beer last year, followed by Asahi, Heineken and Hoegaarden, according to Nielson Korea.

But the industry recognizes Japan’s Asahi, the Netherlands’ Heineken and America’s Miller as the top three, in that order. Budweiser and Hoegaarden are classified as domestic products because they are produced under license by Korea’s Oriental Brewery. This has led to complaints that they don’t taste as good here as in Belgium and the United States.

“Asahi saw its sales shoot up 20 percent on-year in 2011,” said Yoon Soo-han, a spokesman for Lotte Chilsung, its official importer. “Last year, 45 million liters(11 million gallons) of beer was imported to Korea, up 11 percent from 2010. We believe this figure will keep growing at a formidable speed. Around 3,500 pubs and restaurants sell Asahi draft but we will get this up to 4,000 this year.”

Heineken Korea said sales of its Dutch beer went up 1.7 percent last year. To maintain momentum, it is hosting an electro dance music festival called “Sensation” with celebrity DJs at Kintex in Ilsan in July. The festival first kicked off in Holland in 2000 and has toured 15 countries. This will mark its debut in Asia.

“Foreign beers are estimated to grow to 10 percent of Korea’s total beer market in a few years,” said Ryu Hyun-jung, a spokesman for Heineken Korea. “Heineken sees a lot of potential in the Korean market.”

Retailers have been expanding their foreign beer portfolios since 2010 in tandem with the mushrooming number of pubs that specialize in selling them.

Homeplus officials said that more Koreans are going abroad to live, travel or study and are returning home dissatisfied with the products they grew up with.

“Whereas on-year sales of domestic beers and soju dropped by 7 percent each in the first quarter of this year, sales of foreign beers rose 21 percent,” said Ahn Ki-dong, a liquor buyer for Homeplus.

“At this pace, we estimate foreign beers will control 13 percent of our entire liquor sales this year, up from 10.6 percent in 2011,” he said. “They already account for 21 percent of our total beer sales but that will rise to 25 percent this year.”

On a similar note, Lotte Mart said it will increase its selection of imported beers by more than 15 percent to 150 after it saw on-year sales grow 16.8 percent in the first quarter.

“Imported beers are hot right now because more people are taking care of their health and opting to drink less, or choose beverages with a lower alcohol content,” said Jung Yong-hwan, a spokesman for Lotte Mart.

Threatened by the rapid growth of imported beers, Oriental Brewery in March 2011 rolled out OB Golden Lager, which the company claims offers a taste similar to trendy foreign beers. Hite-Jinro rolled out Dry Finish and Max in 2006 and 2010, respectively, with a richer taste of hops.

Keen to also cash in on the demand for foreign flavors, both brewers now import leading Japanese beers including Kirin.