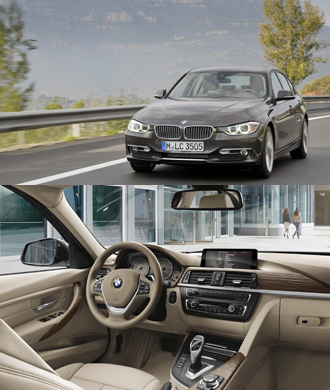 The new 3 -Series BMW is longer and more luxurious than its predecessor. It delivers a smooth but powerful ride. Provided by the company

At first sight, the longer, grander and more luxurious new BMW 3 Series is easy to mistake for bigger models from the same brand.

The sixth-generation 3 Series is 9.3 centimeters (0.3 feet) longer and boasts a wheelbase that has been expanded 5 centimeters, giving you more room to stretch inside.

The curving lines of its exterior create a fuller sense of volume while the stretched headlamps make the vehicle look sharper.

Meanwhile, its 2-liter (67-ounce) engine can generate 184 horsepower - the kind of power normally only produced by much larger engines.

The 3 Series offers three different lines - sports, modern and luxury. I test drove the modern version, a typically classy affair with a front grille consisting of 11 satin aluminum slats and impressive beige tones all over the interior, including the main instrument panel. The panel glows a soft orange instead of red at night, another welcome development.

BMW has gone out of its way to add luxury and comfort to the interior. The dashboard seems more organized. There are fewer buttons clogging up the center and all of the switches are within easy reach.

The navigation still lacks a touch screen function but feels easier to use than before.

However, it is the head-up display - which shows details like present speed on the front windscreen - that marks a turning point in the 3 Series’ evolution. In the past, only some 5 Series and 7 Series models had this function. 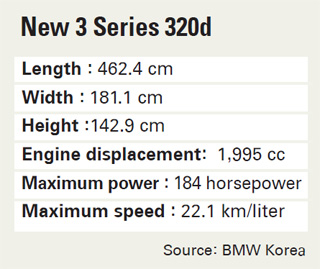 The first domestic car to offer this will be the K9 from Kia when it is launched next week.

On the road, the new 3 Series delivered power without sacrificing comfort, offering better acceleration and more power than the fifth generation. And while the suspension has been criticized for being too soft for a BMW, to me it struck a perfect balance.