Daughter of chef learns the value of dad’s work

Daughter of chef learns the value of dad’s work 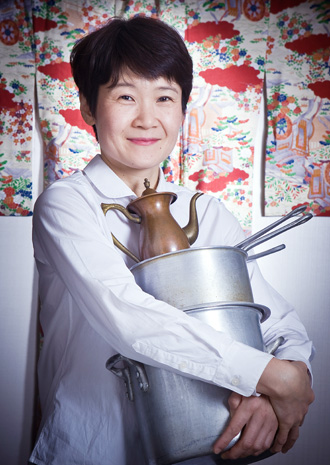 Chef Hideko Nakagawa, author of “A Chef’s Daughter” (2011), is a naturalized Korean citizen who has lived in Korea for 17 years.

She is Japanese by birth, but it seems her life has led her to be half-Japanese, half-Korean. She lives with her Korean husband Park Byeong-jin and two sons, whose names are Jeong-hoon and Ji-hoon. She also runs a cooking school, Gourmet Lebkuchen, at her house in Korea.

Recently, Nakagawa says her kitchen has been brimming with extra cooking utensils she brought over from her parent’s home in Japan. By appearance, the utensils looked quite old and shabby.

But there is more to them than meets the eye. Her father, Damos Nakagawa, is a French chef with around 60 years of experience inside the kitchen, starting from when he took cooking classes at the Imperial Hotel in Tokyo at age 18 in 1952. Nakagawa said from childhood she was naturally expected to be a chef, too, but that she purposely followed another path.

She confessed that she hated her father as a rebellious high school students.

“I hated that white chef uniform because it was not ordinary. It wasn’t like my friend’s father who always wore a suit,” she said.

So, she majored in German language and literature at university, and led a life she felt was the inverse of her father’s. She moved first to Barcelona, Spain, and then to Korea, all to keep away from her “stuffy father.” In Korea, she studied for a graduate degree in literature.

“I studied comparative linguistics at university, and I became curious about the Korean language because Korea is geographically close to Japan,” she said.

She also taught Japanese on the side, and eventually met her current husband after an introduction by her students. It was meeting him that eventually changed her perspective on cooking.

“After marriage and giving birth to two children, I was encouraged to cook,” she said.

She learned to cook Korean food from her mother-in-law for a while, but ultimately decided that the food wasn’t tasty enough. So she decided to learn on her own.

“I asked around to find a cooking school teaching traditional Korean taste,” she said. “As long as I had to learn it, I might as well really learn. That’s why I went to the Institute of Korean Royal Cuisine managed by Han Bok-ryeo, who is renowned for traditional Korean food.”

As part of her studies, she wrote down one by one recipes of the dishes her father made for her in her youth. She also copied her father’s recipes when she visited home.

“When I saw his recipes, I remembered the taste of several meals my father made for me,” she said. “And it also evoked memories of my youth, especially spending time at my father’s kitchen in the restaurant. My father left me unforgettable memories of delicious food.”

Nakagawa said she started managing her cooking school four years ago to let others know that even just one dish can revive love and memories.

“Japan made a fundamental law for ‘eating education’ in 2005,” she said. “It says eating education is as important as mental, moral and physical education. The law lists various elements of eating education such as teaching flavors of foods in ways that will enable children to sort good foods from bad ones. A child’s palate develops from age three to age 10.”

Nakagawa said that her own palate developed as she ate foods from various countries in her youth that were prepared by her father. Because of this, she said she understood new cultures naturally when she traveled.

“The reason I opened the cooking school was also to learn more about various flavors to train my children’s palates effectively,” she added.

Her two sons often express their opinions about their mother’s cooking and come when she does the grocery shopping. “I think food is good for making memories with children as it is an easy excuse to communicate with them,” she said.