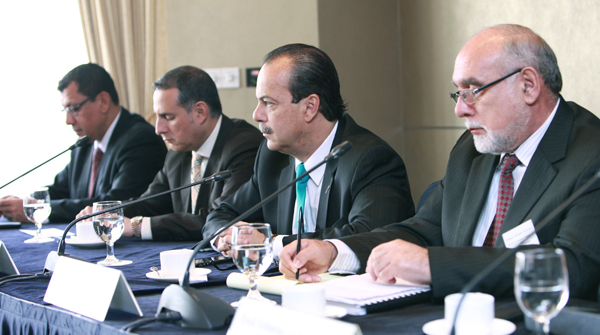 High-level officials from Central America speak at a press conference on their last day of activities of a six-day visit to Korea for a national development and economic policy exchange program sponsored by the Ministry of Foreign Affairs and Trade in the Lotte Hotel, central Seoul, yesterday. Provided by Korea Foundation

High-level officials from Costa Rica, Guatemala, Honduras, Nicaragua, El Salvador and Panama arrived in Seoul on Sunday for a week-long policy-exchange visit sponsored by the Ministry of Foreign Affairs and Trade on Monday.

At a press conference held yesterday at the Lotte Hotel, central Seoul, Honduran Secretary of Natural Resources and Environment Rigoberto Cuellar Cruz said, “Korea was invaded by Japan but has advanced as a stronger nation. Central America has a similar past of invasion. We are in the midst of national development, both socially and politically, and we are keen to apply what we have learned here in the areas of commerce, diplomacy and industry back at home.”

These ministers and secretaries of economic policy, education, environment, energy and trade over the past five days engaged in seminars, lectures and exchanges with Korean economic policy think tanks, including the Korea Institute for Industrial Economics and Trade, the Korea Trade-Investment Promotion Agency and the Korea Development Institute. They also had an opportunity to visit industrial complexes like that of Hyundai Motor.

Cruz expressed he found most memorable his exchange with Green Growth Korea, a presidential committee developed in 2008 to promote low-carbon green growth.

The officials also stated their hopes for a free trade agreement between Central America and South Korea in the near future.