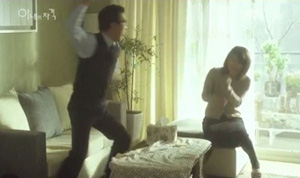 Starting from next month, police will be authorized to enter all sites of domestic violence under a new law.

The Ministry of Gender Equality and Family said yesterday that the revised law for domestic violence prevention and victim protection, which will be implemented from May 2, authorizes police officers to enter all sites of reported domestic violence when a potential victim or the third party of the victim calls the police.

Currently the police are not able to enter the premises if attackers do not let them in or the police fail to witness violence.

“We have provided a stronger law to protect potential victims from domestic violence,” said Goh Eui-soo, a spokesman of the Gender Ministry told the JoongAng Ilbo. “We judge that the law can strengthen safety measures.”

The ministry explained that attackers involved in domestic violence can be evicted from their home by police and have 100-meter restraining orders put in place since last October and this revised law is the follow-up measure for victims.

The ministry said that in the past domestic violence has not been considered a serious crime, but a light dispute between husbands and wives.

It said that the domestic violence research they conducted with 3,800 households in Seoul in 2010 stated that more than 51 percent of victims consider domestic violence as only light family problems, and 62.7 percent of the victims have not reported the violence to police to protect their privacy.

The ministry expects that the law can change the awareness of the domestic violence for both individuals and police officers. It stated that the police officers of the 112 hotline in Suwon had a chance to save the victim from being raped and brutally killed by the Chinese of Korean descent surnamed Woo, 42, on April 1, if the officers had taken the victim’s call more seriously. At the time, the Suwon police officers considered the victim’s call a simple fight between a husband and a wife, which in fact, was the sound of a life-or-death struggle.

“Many police officers should carefully listen to victims to identify domestic violence because many of them still confuse the violence with simple fights,” said Song Nan-hee, the deputy director of the Korean Women’s Hotline.