Seoul to dispatch inspectors to U.S.

Seoul to dispatch inspectors to U.S. 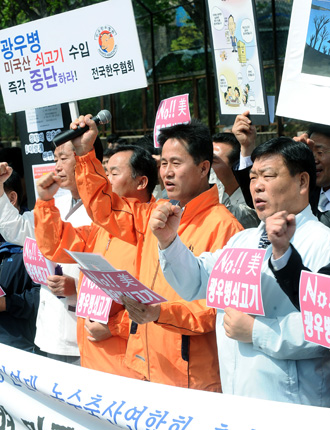 The Korean government is considering sending a group of researchers to the United States to conduct an on-farm investigation following the recent discovery of mad cow disease in California. The move comes as part of efforts to ease public concern over the safety of U.S. beef in Korea.

“The answers to the questions we sent to the U.S. Department of Agriculture [USDA] arrived today at around 10 a.m. by fax,” said Yeo In-hong, head of food trade policy at the Ministry for Food, Agriculture, Forestry and Fisheries, at a briefing held yesterday in Gwacheon Government Complex, Gyeonggi. “Regardless of how reliable the replies are from the U.S., we think it is the correct procedure to send our officials to check with our own eyes to relieve public worries.”

Immediately after the USDA confirmed a mad cow disease outbreak in a dairy cow in California, Korea’s Agriculture Ministry sent a document on Wednesday asking the American government 12 questions, including the age of the dairy cow infected with bovine spongiform encephalopathy (BSE), the type of the disease and the location of discovery.

Yesterday, the USDA delivered a five-page response, which the Agriculture Ministry is currently reviewing. In the document, the USDA confirmed that the cow was almost 11 years old.

The agriculture ministry said that the research group will also include officials from civic organizations and private institutions along with government officials. They will visit the California farm, disposal facility and also the agriculture department.

“We have already asked the U.S. to cooperate with us should we send our inspectors there,” Yeo said.

Prime Minister Kim Hwang-sik also commented on this issue yesterday, saying that Korea will swiftly inform the public of all information on the latest mad cow disease incident in the U.S. and take necessary steps.

“The government will handle the issue based on scientific and reasonable grounds,” Kim said, in a meeting with government officials. He noted that the latest case was discovered in a dairy cow older than 30 months. Korea currently only imports meat from cows younger than 30 months.

As part of additional efforts to ease public concern, the government will be checking 50 percent of all U.S. beef, up from 30 percent that was revised from 10 percent the day before yesterday.

In the meantime, the U.S. Food and Drug Administration reiterated yesterday that its livestock feed system was safe and that the mad cow disease was “atypical” and could not spread to other cattle.

“The FDA is confident in the effectiveness of the existing animal feed safeguards designed to prevent the spread of BSE through feed,” the regulator said in a statement. The announcement came one day after Indonesia on Thursday banned U.S. beef imports. It was first country to do so after the mad cow disease was discovered on Tuesday. “Although current science suggests that atypical cases of BSE, such as this one, are unlikely to be transmitted through animal feed, the FDA will work with the USDA to complete a thorough epidemiological investigation,” it said.

Concerns are mounting, nevertheless, that the recent mad cow disease outbreak in the U.S. may become a highly politicized issue for parties ahead of the presidential elections in December. American beef imports have always been a politically sensitive issue in Korea with the latest in 2008 when the Lee Myung-bak government’s decision to resume imports of American beef sparked months of antigovernment rallies.

Public perception back then was that the Lee government threatened public health to appeal to the U.S.

Opposition parties and other critics are yet again criticizing the current government for reneging on its 2008 promise to immediately halt imports if a new mad cow outbreak in the U.S. is found. The government is cautiously watching the developments as the situation may turn into anti-government protests. Civic groups have planned a candlelight vigil on May 2 near City Hall, in central Seoul, to commemorate the first 2008 protest that took place on that day four years ago.