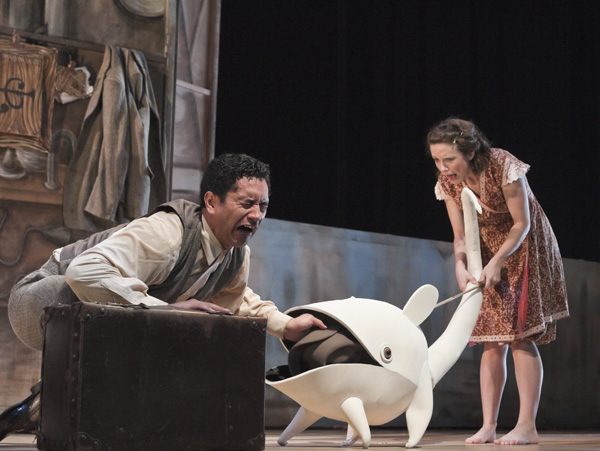 New Zealand theater company Red Leap will perform a nonverbal play based on “The Arrival,” an illustrated children’s novel by Shaun Tan, from Thursday to Sunday.


When foreign plays come to Seoul, they can hit a brick wall, the language barrier, that even the most perfected translations can never fully overcome. But the beauty of “The Arrival,” to be performed in Seoul from Thursday to Sunday, is that it presents the most human of problems in the most universal language.

Based on the illustrated children’s novel by award-winning Australian author Shaun Tan, the nonverbal play presents puppets as characters yearning for inclusion among others in a foreign land.

The book tells its story with a series of wordless images, focusing on a man who leaves his wife and child in an impoverished town to seek better prospects in an unknown country on the other side of the ocean. He eventually finds himself in a bewildering city of foreign customs and encounters peculiar animals, curious floating objects and indecipherable languages. While trying to find a place to live and food to eat, he is helped by strangers, each carrying unspoken histories of their own. 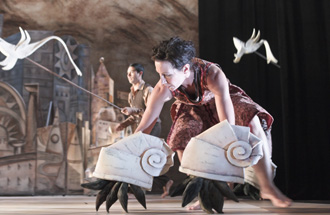 The puppeteers who operate the characters are intentionally visible to the audience. Provided by the organizer

To put the most imaginative performance on stage, each cast member was made to read the book and pick a handful of the most powerful images with which to retell the story. The two artistic directors put their heads together to decide how to portray the drawn characters in three dimensions.

“We asked ourselves a lot of questions. ‘What materials suited them best?’ ‘How would we operate them?’ ‘Did they need to be a puppet or a character actor?’ ‘How would the ensemble cast manipulate the puppets?’ and many more,” Kate Parker, one of the artistic directors of Red Leap, the New Zealand theater company presenting the play in Seoul, said in a press release. “Then we practically looked at how to answer these questions by experimenting on the rehearsal floor.”

The book’s main creatures include a half- tadpole, half-dog, which becomes the traveler’s friend, as well as a cat, an owl and some birds. In the theatrical adaptation, actors stray from mainstream puppetry by remaining clearly visible on stage. Typically, puppeteers dress in black to hide from view. This unique arrangement seems to have allowed the actors to develop special attachments to their characters.

“Ella, the actor who operates the tadpole-dog, found an affinity with operating it during the rehearsal and in a sense, cast herself, or perhaps, the tadpole-dog cast her,” Parker said.

Parker said she instantly knew that “The Arrival” was right for Red Leap, which specializes in creating dynamic theater that incorporates puppetry, music, dance and other art forms. All that the performers needed to do, she said, was “give life” to the characters in the book.

“The creatures and images were what first attracted me to Shaun’s work,” she said in a statement. “As I read ‘The Arrival,’ I saw them coming to life on stage and knew that this was a work we just had to adapt to the theater.”

To leave its own mark on the performance, the theater company added sounds and music by collaborating with a composer and sound designer to create a completely original score.

Producer Lauren Hughes said that the sound team had few constraints on its creativity as there is no sound in the book to which the play must conform.

“Making ‘The Arrival’ taught us many things .?.?. We get incredible feedback from audience members telling us how the show has changed them, what it has meant to them. We have had audiences of refugees, of the deaf, of families, students and of arts festival patrons,” Hughes said in a statement. “We are motivated by theater that is accessible and meaningful to everyone on their own terms. So in terms of what inspires us now, it is those stories, images, moments, experiences that speak to our hearts. Those are universal human tales.”

The four-year-old theater company has already won big at the 2010 Chapman Tripp Theater Awards, with “The Arrival” coming out on top for best production, most original production, best director, best set and best costume.

LG Arts Center is betting that the performance will be just as successful in Seoul.

“[‘The Arrival’ will] arouse admiration from Korean audiences, as the characters in the book come to life on a sophisticated stage while the story is told only by mime and body gestures, making it an internationally appealing production.”


* The Red Leap will present “The Arrival” at 8 p.m. on Thursday and Friday and at 2 p.m. and 7 p.m. on Saturday and Sunday at the LG Arts Center in southern Seoul.